The Strange Quest of Nurse Anne 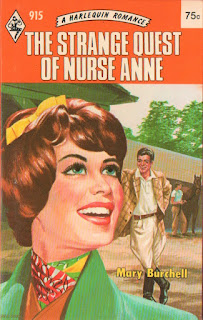 To Anne Weston, brought up in an orphanage, the sudden discovery of her American cousins was as astounding as it was wonderful, and when they invited her to stay with them in their Maryland home her cup of happiness was full. But as her visit went on, Anne found herself becoming filled with suspicion—and unease…

BEST QUOTES:
“Rumor flourishes more luxuriantly in hospital ground than in any other known soil.”

“Surgeons are the biggest menace in creation to susceptible girls.”

“Only dull dogs are universally loved.”

“If anything is obscure or dreary it’s sure of excellent reviews.”

“There’s no great virtue in refraining from doing something that’s no temptation.”

REVIEW:
What could have been a truly superlative book is slightly dampened by the old trope of a VNRN heroine who is dumber than a beetle, as my grandmother would have said. Time and time again, faced with the obvious, Anne Weston, who had the brains to get through nursing school and emerge a very talented nurse, is unable to recognize it. The interesting thing here is that her character in some ways makes this stupidity feasible: Raised in an orphanage without any knowledge about her parents, Anne has had no support or family to fall back on, and has made her own way in the world, which was essentially to take a path straight from the orphanage to the hospital nursing school, where she has lived for the past three years—from one sheltered environment to another, with little exposure to the world. The unfortunate part is that author Mary Burchell has not been able to prevent us from feeling anything other than contempt for Anne’s stupidity. Though her talent as a writer is clearly evident, I wish Ms. Burchell had tried a little harder to sell us on Anne’s blind spots and make us believe her decisions a little better.

As the book opens, Anne is about to bid farewell forever to the hospital and surgeon Philip Coram, on whom she’s had a slight crush, but of course, “he could hardly have been more impersonal and was sometimes cruelly critical.” But on her way out the door, he stops her and tells her she’s one of the best nurses he’s known, asks her what her plans are—and, curiously, what her name is—and when she says she’s going into private nursing, he says he’ll ask for her for his patients.

He calls her for the job of wrestling wealthy and self-centered widowed dowager Mrs. van Elten across the ocean to New York, and it’s worth reading this book just to meet Mrs. van Elten. She’s a salty, outspoken, smart, hilarious, manipulative, and kindly grande dame, and she is Fabulous! Then, just as she’s to leave for the trip, Anne receives a letter from a long-lost cousin, Paula Weston, who has somehow tracked her down, following up the efforts of Anne’s father Donald, who had moved to Australia and died a year ago without ever locating Anne. Paula and her brother Glen live in Maryland and are eager to meet their new cousin, who now will be not as far from them when she finishes her job with Mrs. van Elten. But Anne’s best friend Karen, who “had what she called hunches,” is uneasy about the whole thing, and Anne herself catches a “deep and ominous chill” as the boat pulls out of the Southampton harbor en route for the New World. She’s warmed to the core a few minutes later, though, when she learns that Dr. Coram is sailing on the same boat, bound for medical conferences in New York!

Needless to say, Mrs. van Elton instantly divines Anne’s interest in Dr. Coram, and starts to work on the pair. “I find people intensely interesting,” she tells Anne. “My daughter says I can’t mind my own business about them. But I like to advise and praise and criticize. Particularly to criticize.” Though Mrs. van Elton warns Anne that Dr. Coram is engaged, she still schools Anne on what color dress to wear and insists that Anne stay at the dances after she herself has turned in, the better to dance with the doctor. Anne’s relationship with Dr. Coram grows organically, and soon they’re on the Lido Deck under the stars, but Anne remembers the fiancée at home and becomes chilly just when things start to heat up. After they land in New York, Dr. Coram goes way beyond the call of duty to drive Anne the five hours from New York to her cousins’ house, which is a decaying former country estate; as it turns out, the cousins’ father had gambled away most of the family fortune and they are barely able to keep the place.

Cousin Glen is a smarmy sort of fellow, and his “almost beautiful smile never touched his handsome eyes, which remained hard and curiously inscrutable.” He’s instantly all over Anne, insisting that she marry him, and tells her that Dr. Coram, who had grown up in the area, had “played fast and loose with one or two girls in Washington, it seems, and he got quite a bad name in a set where it takes really something to make people talk.” This runs completely counter to everything Anne knows about Dr. Coram, but she starts to feel less about him, the dope, when it’s completely clear what’s Glen is really up to. There are many other obvious warnings about the cousins’ ulterior motives: A letter written by Anne’s father has been “accidentally” destroyed, and—curse the postal system!—so has another letter sent to her in care of her cousins from a Sydney attorney who, Karen says, is looking for Anne to give her good news about her father’s estate. Then Anne meets the old, slightly senile man who had been a groom on the estate for 50 years, who tells her that her father was rich and that the cousins are trying to get her money. Does the penny drop? No!

When Dr. Coram arrives to bring her back to New York two days later, Anne is completely rude to him, all but slamming the door in his face, and thanks for the ride, bub. The author suggests that Anne is so enthralled with the idea of having a family at last—“it gives one a sort of confidence and security to find a place and a family where one belongs,” she tells Dr. Coram—and Anne genuinely likes Paula, who deserves it, and Glen, who does not—which sets her up to believe what is an obvious ploy to get Dr. Coram out of the picture. And then she’s deeply flattered to be the object of affection for the first time in her life: “It was so utterly wonderful to feel that someone—perhaps, above all, her big, handsome warm-hearted cousin—thought her all-important.” So it is possible, given Anne’s background, that she could be this stupid—but it’s not well-sold to the readers, who can’t help wanting to give Anne a hard shake.

But then Mrs. van Elten drops a bomb—the fiancée is just a myth she’d created to keep Anne from running after Dr. Coram, thinking that “if he were made to do the running, you were just the right girl for him,” as she explains. Fortunately, Anne has the strength of character to call up the abused doctor and apologize profusely, and the pair are restored to friendly terms. But then Mrs. van Elten goes to Florida, freeing Anne to go back to her cousins’ house, and there our suspicions of them pile up—until finally even Anne can’t deny that something terrible is afoot, and when she sneaks out of the house to visit the old retired groom again, he suggests that the cousins might kill her for the money! Finally coming to her senses, she puts on a happy face, makes a frantic call to Dr. Coram to come get her tomorrow, and goes to her bedroom to lock herself in, but the key to her bedroom door has been taken! She stuffs her money in her dress, jumps out the bathroom window, and runs away—but Glen is coming after her in the car! Oh, no!! What will happen next?!?

Overall, this is a lovely book, with a truly outstanding character in Mrs. van Elten (she reminded me of Lady Travitt in Nurse Stacey Comes Aboard, though that book does not come close to this one) and a relationship between the lovers that grows honestly. Its biggest flaw is the fact that Anne is such a dunce about people, and the tragedy is that I think that an author who has given us a book this good could, with a bit more effort, have made Anne’s gullibility more understandable, so we might have wanted to smack Anne upside the head fewer than the two dozen times I did—especially at the end, when she makes a bizarre decision about the money she’s inherited. The title and the cover illustration are both more than a little perplexing, but we can’t pin those sins on Mary Burchell, who likely had nothing to do with either. But overlook the strange envelope, and you will enjoy what you find inside it, if your evil cousins don’t destroy it first.