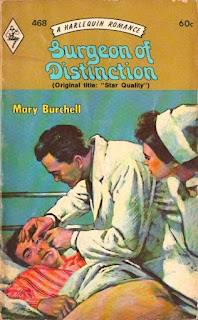 Maxwell Perring was a surgeon with a special distinction about him; “star quality” it might have been called in another profession. Nurse Alma Miles admired his work, but had never thought about him as a man. All her thinking of that sort was centred on Jeremy Truscott—and he was presenting quite a problem.

BEST QUOTES:
“You can’t address anyone as ‘sir’ when he’s proposing to you.”

“Few people, she found, can resist the exquisite temptation of talking about themselves, if a sympathetic audience seems available.”

“She wondered if anyone else had ever been so silly as to indulge in romantic nostalgia over an appendectomy.”

“Don’t praise him too affectionately. It puts a frightful strain on my regard for him.”

REVIEW:
Some nurse novels have plots so intricate that it takes many paragraphs to convey the story. This charming story of Mary Burchell’s is not such a one, but she has the talent to execute a simple story that is nonetheless layered and emotionally complex that the lack of story line is no hindrance at all..

The plot, such as it is, is that Nurse Alma Miles has been seeing Jeremy Truscott, and has been hoping they would become engaged, when he starts blowing her off—and eventually she sees him going out with Nurse Geraldine Grayce, who had “a withdrawn, almost enigmatic quality which was not entirely friendly.” “She was quite courteous when spoken to, but no actual warmth emanated from her.” To escape from her heartbreak, Alma accepts a job at another hospital working with distinguished Dr. Maxwell Perring. Initially one might be concerned that he is one of those love interests: He has “a quiet assurance which bordered on arrogance, and the faintly sardonic curve to his mouth showed that he was not a man who suffered fools gladly.” He’s a brilliantly gifted surgeon, but he also remembers to tip the waitress: “It’s nice to have someone really knowledgeable at one’s elbow,” he tells Alma after her first day working alongside him. He’s warm, friendly, and respectful gently humorous, and “very good-looking,” of course!

As one of many quite astonishing coincidences in this book, Jeremy is run over right outside Alma’s new hospital, and Dr. Perring and Alma perform the life-saving brain surgery. But when Jeremy wakes up, he does not remember Geraldine, only Alma—and is convinced they are engaged. Sent to his flat, Alma finds a ring with Geraldine’s name on it, and bringing it to Jeremy, he proposes to her. She accepts, in true VNRN trope, because “he must not have his recovery jeopardized by the faintest hint of the situation”—but she is an honorable, honest person with no intention of holding to the lie, and so tells Dr. Perring the whole awkward story, and gives him the ring to hold, because “it isn’t mine. I can’t bear the sight of it. I can’t go on living a lie like this!”

But gossip gets out, as it is wont to do in a hospital, that Alma and Jeremy are engaged. Fortunately, it only takes 15 pages before Jeremy remembers all, and Alma honorably gives him up. Miserable to lose Jeremy a second time, Alma goes out for a walk and wanders into a ballet—and amazingly, Dr. Perring is there alone as well, in the seat next to hers! He takes her to dinner afterward and suggests that she can escape the hit to her reputation by becoming engaged to him, though he is fully aware that she is in love with Jeremy.

She agrees, because she has a deep esteem for Dr. Perring and thinks that marriage to him could be a moderate success—and then we slowly watch the unfolding as an upstanding, honorable woman dumped by a shallow cad but now allied with a like-minded, dependable man evolves in her feelings. There’s a silly misunderstanding in the end in which the hitherto strong and outspoken Alma is inexplicably unable to correct a stupid situation, but this is the only black mark on this otherwise fine, subtle book.

Alma is a worthy heroine: She is an accomplished scrub nurse with a strong sense of humor and (most of the time, anyway) a dignity and backbone that allow her to insist on and command respect. Max could have been one of those older, colder men who are forced on us as a love interest but who are in fact frightening and creepy, but he is finely drawn as a dignified surgeon with a real personality outside the OR. The writing can sparkle quietly, such as when dawn breaks on a heartbroken Alma who had cried all night: “Monday morning came and Alma was still alive.” The only other flaw this book has, outside of the ubiquitous misunderstanding, is the large number of stunning coincidences on which it hinges, but this is such a minor problem in what is after all a work of fiction, particularly in view of the many lovely moments this book offers the reader. How satisfying to find not just a surgeon of distinction, but a book of distinction as well.