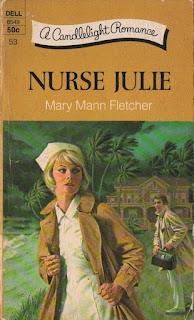 When lovely, blond Julie Blake saved the life of young Rammie Wynant—the frail, neglected son of millionaire Bram Wyant—even the arrogant Dr. Ben Foreman had a few words of praise for her. Certainly Julie was a brilliant nurse. But she was also a woman, and she soon found herself hoping that Dr. Foreman was gazing at her with more than professional interest. And when Julie suddenly found herself being courted by a mysterious stranger, the doctor’s jealous reaction suggested that his interest was not just her imagination. What were Ben Foreman’s true feelings toward Julie? And who was this enigmatic stranger who claimed to be just a beachcomber … but whose sophisticated manner suggested much more? A near tragedy revealed the truth about both men. Now Julie had to discover the truth about herself.

BEST QUOTES:
“Any night of the week in emergency rooms of hospitals all over the world brings grief and heartache and harrowing sounds of pain and despair, but Saturday night brings more misery than has a right to exist.”

“Ben Foreman gives me a trachelodynia—that’s a pain in the neck, as if you didn’t know.”

REVIEW:
I really do not understand why there is such a firmly established trope in nurse romance novels in which a moody, mean, distant man is exactly the guy our heroine tumbles for. Why is that a thing? It makes absolutely no sense, and yet here we are, for the hundredth time, meeting “easily the most unpopular doctor at Hope Hospital with the nursing staff, because of his rough manner and abrupt way of talking” and “black moods and general surliness,” Dr. Ben Foreman. One night, alone in the ED, Nurse Julie Blake oversteps her scope of practice and suctions a choking nine-year-old boy. Brusquely shoved aside when Dr. Foreman shows up, she talks to the housekeeper who’d brought the boy in and learns that he’d been eating peanuts, and suggests to the doctor that the kid likely aspirated one. Turns out she’s right, but Dr. Foreman can only chastise her for having taken off her regulation stockings in the hot Florida night. “But somehow every time she was around him, she found her heart beating faster and she had trouble keeping her mind on her work.” It’s hard to understand why a talented, intelligent woman doesn’t think she deserves better.

We are allowed into Dr. Foreman’s crabbed little mind, only to discover a personality deeply in need of therapy. He’s an orphan who had fought hard to succeed but was sponsored in medical school by a single rich man who essentially adopted him—so he certainly could have had it a lot worse. Ben has decided to be an “open-heart” surgeon, and “would have years and years of study ahead of him, as well as additional years of residency. He never thought of girls, never dreamed of marriage—he couldn’t afford such a luxury, not for at least another five years. His hatefulness toward Julie in the emergency room was a defense mechanism,” because he seems to believe that he can have either his career or a girlfriend, but not both. Come to think of it, this is exactly the choice the women are often forced to make: career or marriage? Except that for Ben, it’s a temporary sacrifice, whereas for the women, it’s permanent.

So throughout most of the book, we watch Ben being angry, hostile ass, and we watch her waffle: One minute she’s mooning over him and the next deciding that “she actually didn’t enjoy being with Ben—he was much too disagreeable to her, too likely to cut the ground from under her with a word or a look.” “Why should she be so anxious to please a man who either ignored her or insulted her?” Good question! And one that, unfortunately, we will never find a satisfactory answer.

A hundred pages into this fairly dull book, out of nowhere Ben walks Julie to the bus stop and kisses her goodnight. She’s struck starry-eyed, but the next day she’s off for the weekend to the home of the choking boy from the opening chapter, Rammie Wyant, invited by the housekeeper while Rammie’s father Bram is away on a business trip—a bizarre situation, completely unprofessional for both women. While sunning herself by the beach cabana, Julie meets a beachcomber and spends the afternoon frolicking in the sun with him, then out for a luxe date—“My goodness, twenty dollars for two dinners!” she exclaims. “What are you anyway—a millionaire?” Of course, the answer is yes, he’s Bram, hoping to get Julie to like him for himself, not his money.

Initially it seems like Bram will succeed, but then there’s a hurricane, and Ben and Julie are trapped in the hospital, caring for a house full of patients on a short staff—and even on a good night, Julie and one other nurse manage 17 patients (today, six patients for a night nurse is usually the max). The hospital, which in a side plot is on the verge of being closed down by cold, unfeeling real estate developers eyeing the hospital’s prime location on the Florida coast, is eventually saved as you knew it would be, but by an out-of-left-field bizarre coincidence that felt completely lame. In their joy, Ben and Julie start kissing on the sun porch, and somehow this is meant to signify that “it was Ben that she wanted, had wanted all along,” so there’s another disappointing ending, in which she discards a kind, thoughtful man who is happy to be with her for one who is an unmitigated jerk through much of the book. Author Mary Mann Fletcher seems to like horrible men, as she created several in the D-rated Psychiatric Nurse, a book so bad it might be worth reading. I’m not sure, though, that I find this C-grade book a step up, because in the end I can’t really recommend you spend any time on Nurse Julie.