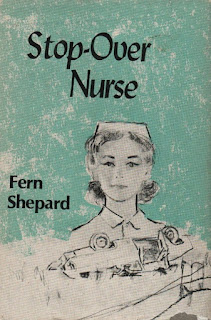 Brenda Gregory, a nurse, was driving a drugged woman patient to the hospital when their car crashed over a cliff, the patient died in flames which burned her beyond recognition, and Brenda, surviving, suffered injuries which required plastic surgery to her face and wiped out all memory of the past. Gradually she recovered in the confines of Stop-Over House, a convalescent home in a California beach town, and even began nursing again there. Then suddenly her memory returned, and she found she had mistakenly been identified as the dead woman and was unable to prove her true identity. Furthermore, a certain quack psychiatrist who was interested in keeping her dead so she could not reveal what she knew about him was willing to swear to the lie and declare her a mental case.

BEST QUOTES:
“Six miles all told! She could never walk it. She’d fall dead in her tracks.”

REVIEW:
For the first few chapters of this book, I would have bet hefty sums that I had read it before. After a thorough search of my blog, I found a couple of books that could have been sisters to this one (the pretty good Masquerade Nurse and the god-awful Jane Arden’s Home-Coming), but no identical twins. So it was a mistaken identity, which as it happens is exactly what this book is about. Nurse Brenda Gregory had caught her awful boyfriend, psychiatrist Dr. Nelson Ludlow, injecting STP, a hallucinogenic that had its debut in the Haight-Ashbury in San Francisco in the mid-1960s, into Brenda’s friend Kitty Carter. Stuffing Kitty into the car, Brenda heads for the hospital, but is hit by another car and knocked over a cliff. The resulting crash and fire kills Kitty and leave her body burned beyond recognition, while Brenda suffers amnesia and terrible facial trauma that requires the best efforts of a plastic surgeon, who has given her a different appearance. When the book begins, it’s more than a year later, Brenda is waking up at Stop-Over House, a convalescent home for people with psychiatric illness, and slowly realizes she’s an employee there, formerly a patient, and is known to all as Kitty Carter—seems Dr. Ludlow and her sister Eve had at the time of the accident both identified her as Kitty, and since she had amnesia she had been thinking she was Kitty. The trick is, how is she going to prove that she is actually Brenda if her ex-fiancé and sister say she’s not? I dunno, fingerprints? Dental records? Birth marks? Blood type? Consult a lawyer? Nah.

Nonetheless, Brenda finds an ally in Kitty’s brother Tom Scott, who is a famous foreign correspondent and who does believe that she’s not Kitty. Tom hatches a plan to catch Dr. Ludlow in the lie: He will tell the press that he has become engaged to her, thereby getting her story into the papers—because her story on its own wouldn’t be at all interesting. The crazy ploy actually works: Ludlow takes the bait and turns up at Brenda’s house to murder her, but it seems that Tom has not bothered to take any precautions once he got the story out. Ludlow nearly succeeds, aided and abetted at every turn by Brenda herself, who first lets the psychopath in—he’s taken so many psychedelics that he thinks he’s the Roman emperor Nero—then fails to telephone the cops or shout for help, sits beside him, and takes the drink he offers her, even though she was “feeling ill with alarm,” all because “she did not want him causing a disturbance.” How considerate! Fortunately, though, two friends of Brenda’s drop by before she’s had more than a small sip of the poisoned cocktail, so she survives.

Next Ludlow tries to kill Brenda’s sister Eve, since Eve was in on the original scheme to misidentify Brenda, and then there’s another hare-brained scheme to get Dr. Ludlow to admit that “Kitty” is really Brenda, and this one succeeds, so everyone lives happily ever after. First, though, we have to a bit of dancing around, with Brenda saying that she thinks Tom doesn’t love her and Tom insisting that he really does. But I will acknowledge that the ending was actually a little sweet.

It’s not the most original of novels, and seems to be not much more than a heaping handful of Florence Stonebraker’s usual tricks—psychedelic drugs, car crashes, amnesia, crazy psychiatrists, and characters named Kitty (see her heroines in Night Nurse, Nurse Kitty’s Secret, and The New Nurse). The writing is fairly perfunctory, with no real amusing quotes to offer you, certainly not what Stonebraker is capable of (Doctor by Day, City Doctor). This is one of four books I’ve read of hers that were published in 1968; an author that busy can’t always knock it out of the park.  William Faulkner churned out what he called “potboilers”—books written largely to earn money—but some of those also earned Pulitzer prizes. Stonebraker will win no awards with this attempt to pay the rent, and more is the pity, since I know she can do so much better.