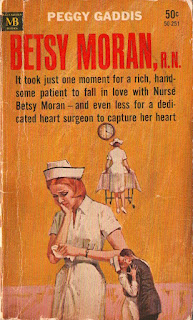 “Special duty with a millionaire…” Nurse Betsy Moran’s roommate moaned. “I’ll never know how you managed to turn the heads of the two most eligible bachelors on the staff, to say nothing of the town’s most exciting playboy.” Judy sighed deeply, “What have you got that I haven’t?” “Oh,” said Betsy, laughing at her friend. “Let’s just say it’s a gift.”

“She had to arouse the boy and keep him aroused lest he slip away into a coma.”

“You’re a very lovely girl, and any man would be delighted to wear you on his arm.”

“I’m just sick that I lost my temper and shot you!”

“Us nurses look pretty special in our uniforms. Bet the gals he trots around with when he’s up and on his own two feet break their necks getting all dolled up to devastate him. And when we nurses come along, all starchy-white and soothing-looking, the man does a nose-dive!”

“Sure you don’t want to marry me? It might be fun. And any time you got fed up, all you’d have to do would be to say so and you could have a divorce.”

REVIEW:
Twenty-three-year-old Betsy Moran has a way with men. She scores a date with eligible Dr. Paul Elliott, and then one with widowed surgeon Dr. Stevenson—never mind that he’s twice her age! Dr. Stevenson asks her to special wealthy playboy Dr. Ken Hargroves, who has been shot in the back by one of his girlfriends, though he won’t say who it was—and when Betsy finds out, she, too, agrees to shirk professional ethics and the law, and refuses to name the culprit. She’s perfect for the nursing job, Dr. Stevenson decides, because “Ken Hargroves would go out of his mind without a pretty girl to look at. You just be somewhere Ken can look at you when he needs to.” She does her job well, and soon Ken is putty in her hands!

Outside of her dating life, Betsy’s down time is pretty well booked with lunches every Sunday with the aging Miss Emily Wingate, a wheelchair-bound, wealthy spinster near the end of her life, and Miss Emily’s nurse, usually called Maggie by Betsy, but who surprisingly turns out to be Betsy’s mother. The Miss Emily character, angelic but fading, is a Peggy Gaddis staple, and you will not be as shocked as Betsy was to learn that she’s to inherit $100,000 when Miss Emily dies. But her visits to Miss Emily are not so damaging to her social life, after all; she is nearly in a car wreck in Miss E’s driveway, and the young attorney driving the other car, Larry Donovan, insists that she go out with him. Which she does, once, even if the guy is a bit of an ass, becoming angry at Betsy when he runs into her when she’s out on a date with Dr. Paul—but she gets all frosty and refuses to say she won’t go out with Larry again when Paul asks her not to. Curiously, when Larry crashes a lunch at Miss Emily’s house to see Betsy—he tells her, “When I see something I want I go after it, with no holds barred,” forgetting that she might have something to say about it—the dowager asks Betsy not to see Larry, and she insists that she’s not at all interested in the cad, saying that he does not have “the kind of charm that would appeal to me. You don’t have to worry about him. I’ll even promise never to date him again, if it will ease your mind.”

Betsy even has a fair amount of nursing to do, between lying to the suicide victim and telling him he’s going to be fine when everyone knows he’s going to die in about ten minutes, and trying to get the unmarried forty-something career woman Doris Lathrop, hospitalized for atherosclerosis, to stop having temper tantrums, which seem to give her seizures and heart attacks. But not to worry, a man shows up out of the blue with a bouquet of flowers for Doris, so she enthusiastically agrees to give up her career, move to Florida, and marry a man she hasn’t seen in years, and didn’t look twice at when she did know him. Life’s problems solved!

Eventually one of Betsy’s many suitors proposes, on their third date, and then we have two pages of swooning and smooching. And that’s about all there is to this book. It’s not badly written, although on every other page Betsy’s eyes are widening, or she’s staring “round-eyed.” The patients’ story lines are hackneyed and certainly condescending to Doris Lathrop, who isn’t happy until she trades her career for a man. Peggy Gaddis has given us more treacly porridges to choke on in the past, and this isn’t quite as bad as some of her books, but really, that’s not much of reason to spend any time with Betsy Moran, R.N.