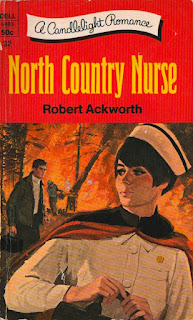 Lovely young Mary Loring, her nurse’s training behind her, came home to the north country for two reasons—one, to help the people in this vast wilderness land; the other, locked in her heart, to work with young Dr. Ken Shannon who was coming back here to start his practice. But when Ken stepped off the plane, beside him was a beautiful, titian-haired bride. Now Mary wanted only to escape—from this man she could never have, from her beloved north country that would always remind her of him. It took a startling confession from Ken, and a danger-filled mercy flight with a devil-may-care pilot named Eddie Garrett, to show Mary that she didn’t have to run away—that a girl doesn’t always know the secrets of her own heart …

BEST QUOTES:|
“It’s odd that of all the moments a person passes in a lifetime, only a few are important, isn’t it? I wish now that I had decided I wanted to be something, instead of insisting that I must belong to someone.”

REVIEW:
Nurse Mary Loring has returned to her home, a tiny town of 900 God-fearing souls in the “north country,” unspecified except that it’s not Idaho—Montana? Wyoming? Some state that is home to dude ranches and trappers and loggers—and few medical personnel. Mary is coming back with every intention of marrying Dr. Kenneth Shannon, who also grew up in this town. She’s been crushing on him for a decade, since she was 12 years old—they grow up fast in the mountains—when he left for medical school, and she’s seen him only a couple of times since then, so right off the bat we’re stuck with this extremely awkward and implausible albatross of a major plot device. And it’s not improved when the good doctor steps off the Cessna with—gasp!—his new bride!

Mary immediately decides she will leave town, never mind her vows to help her isolated fellow citizens, which would leave them without a nurse. But only a month after Kenneth arrives, “when people would not be likely to guess the real reason for her departure.” Does it really matter? Anita Shannon turns out to be as incredibly gorgeous as she is shy, completely unable to extend herself or make friends. Mary just hopes that “the absolutely unexpected might happen” while Anita is out taking long walks in the woods, or that “the strange woman who was Kenneth Shannon’s wife might walk out on him.” Nice! Kenneth does his best to get help for Anita—unfortunately asking his best female “friend,” Mary, to befriend Anita, “who was seen less and less as the days went by.”

Again and again, given an opportunity to be generous, mature, and kind, Mary instead puts on a deep freeze, doing little, and then only when absolutely forced, thinking that “her only hope for a future with Kenneth rested with the possibility that Anita Shannon would not make adjustments.” Anita even tries to unburden herself about her difficulties to Mary, but Mary just acts indignant at the “cold peculiar” woman and completely shuts her down, snapping, “Mrs. Shannon”—and her formality of using Anita’s married name is hostile all by itself—“I just won’t comment. What you do is entirely up to you.”

Later, when through her own hard work, Anita starts to open up and make friends with other villagers, “Mary could not help staring at Kenneth Shannon’s beautiful wife. She had seemed almost warm. It was hard to believe.” Naturally, Mary’s enormous hypocrisy is completely lost on her—and possibly on the author as well, as he makes no hints about how horrible Mary has been, and Mary never experiences any regrets about her cruel behavior.

When she’s not giving poor Anita the cold shoulder, she’s running hot and cold with three men in town. She accepts dates with forest ranger Tom Fogarty, even though she thinks he’s boring and awkward, and though she knows her best friend has a crush on him—and she’s completely taken by surprise when the friend, who feels doomed to be a spinster in this tiny town of few single men, leaves town for manlier pastures. Mary also has hot and hunky Perry Wynn, who runs her aunt’s ranch very capably, hinting gently about his feelings for her, but Mary calls him strange too, and gets all cranky anticipating she’ll have to turn down another man she doesn’t want—but is “annoyed” when he doesn’t stand in the barn door to watch her leave. Last is pilot Eddie Garrett, a frightening, arrogant man whose behavior toward Mary crosses well into harassment, making me concerned he’s a potential rapist: Though she’s told him from the outset that she’s not interested in him, he will not take no for an answer, and instead leers, “I’m going to make you get to know me,” and “I’m going to find your breaking point someday—the kind of breaking point I mean.” He grabs her at a dance and refuses to let go as she tries to pull herself away, saying, “When we dance you have to let me hold you in my arms. If I tried it any other way you’d yell blood murder from a false sense of outrage.” But when he tells her he was orphaned and raised by uncaring relatives, suddenly Mary feels guilty about “how unjustly she had leaped to conclusions about him,” and apologizes to him when he kisses her. Ew.

The rest of the book has some pretty descriptions of the north country scenery, especially if you are fond of the forests of the western states, but the medicine is laughable (the doctor, who performs appendectomies, is unable to manage a punctured lung, which only requires a chest tube; Mary brings large quantities of tongue depressors to a forest fire first-aid station) and of course Mary herself is obsessive, self-centered, and vindictive, and her choice of men in the end is unfathomable—she is, in short, not a likeable character. The writing otherwise isn’t terrible, but it’s just too difficult to get around the problems of a stupid plot device combined with a stupid heroine. I love the north country, but I could not love this nurse.