The Hospital World of Susan Wray 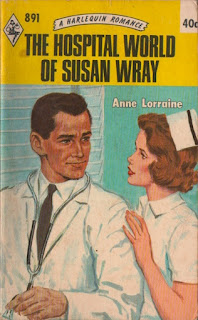 Susan became aware that the doctor was watching her. He leaned back in his chair, studying her small office, the bookshelves laden with medical books, and, slightly incongruous amongst such technical matter, a row of brightly covered detective novels. He noted the vase of flowers on the mantel, the only apparent concession to feminine love of decoration. “It’s a good room,” he told her suddenly, unexpectedly. “A good place in which to forget hospital existed. It’s like an oasis, right in the heart of suffering and fear. It reminds me somehow of you, sister. There is something strong, unshakable, a quiet serenity about it, such as you carry with you in your work.” Susan stared at him, her eyes dark with surprise. This—the moody, intractable Dr. More? He had always seemed oblivious of her presence, yet evidently such had not been the case. She felt confused and embarrassed at his words. Thus begins to story of a nurse and doctor whose personal and professional lives are to merge.

BEST QUOTES:
“Young folk are afraid of truth, because it hurts, it hurts like the devil. It’s only when you’re old and tired, like me, that you know it’s the only decent thing in the world—is truth. You learn to love it, then, you let it stick into your heart, and you don’t even feel the pain.”

“‘Want to hear about the abscess now?’ he inquired, and she forced a look of interest into her face.”

“So many of you doctors approach the patient in the same way as a butcher would approach a delectable carcass, and with about as much visible feeling!”

REVIEW:
Susan Wray begins her book with two common tropes around her neck: (1) Her fiancé Jimmie Preston is paralyzed from a car crash, and (2) her younger sister Dinah is a flighty, undedicated nurse working under her supervision at a small English country Hospital. Susan herself is an outstanding nurse, with “a bottomless well of human understanding and tolerance,” loved by patiens and nursing students alike, who speaks “quietly,” “serenely,” “imperturbably,” “softly,” “carefully,” “gently,” or “calmly” on every page. She is incomprehensibly devoted to Jimmie, whom she visits without fail for a couple hours every week, when she begs him to marry her, and he refuses. “I wanted to devote my life to him, to work day and night to bring health and strength back to him,” she explains to a patient. “I could make him well.” But Jimmie refuses to marry until he can walk again, per usual.

Sister Dinah became a nurse only after their parents died and Susan, it seems, forced her to, but she hates it! Then up turns the mysterious Dr. David Wright, exiled to their back-water hospital because of some terrible mistake he’s made. “I she’ll never touch a knife again as long as I live,” declares the once-famous brain surgeon, and one assumes he won’t be ordering anything less than fillet mignon for dinner, less it be too tough for his fork to handle. In his presence, however, Dinah goes to pieces, and David also pales—and it takes a while for their secret to out: They once worked together, and he had a tricky postop patient whom he left in her care—but she had a date and ran down to the nurse’s station to ask if someone to cover for her, and the patient died in the five minutes she was out of the room. The patient’s unattended death was such a scandal that Dr. Wright was sent packing—a ludicrously implausible story, not improved by Dinah’s eventual confession that she’d been asked to monitor the patient, which somehow completely exonerates Dr. Wright and gets him his old job back.

Enter trope #3: We meet Dr. Jonathan More, who is an amazing physician but who is always irritated; Susan calls them “the most cynical, work-absorbed, uninteresting, dull man.” Despite her vows to have as little to do with him as possible, you will not be shocked to discover the cold automaton is soon feverishly clasping her hands and declaring in a hoarse whisper, “It’s you I love, understand?” But after their passionate embrace in the garden, he reveals he is married! Who will Susan and up with in the end?

In the interim, there is the story of a woman OB, Dr. Teresa Drake, who thinks her husband has fathered an illegitimate child and who agrees to adopt a baby based on the village gossip, bizarrely deciding never to ask her husband if the rumors are true. Along the same vein of never seek out the truth no matter how hard it is pounding on your door, Susan also shuts down poor Dr. More every time he tries to tell her about his wife, who clearly does not live with him. What we have here is a failure to communicate.

We are also given conflicting messages about women’s roles: Dr. Drake tells Susan repeatedly how wrong she was not to have had children. “A woman is never completed, or utterly happy, until she has produced a child her own.” Since Dr. Drake ends up adopting, we can assume that her declarations of how happy she is are untrue, since she did not produce the child in question. For her part, Susan decides that “only by sacrificing her career could she ever prove to Jimmie that she loved him,” and when she has finally settled on a man, she tells him, “If you would prefer me to give up my work—I’ll give it up.” (To his credit, the gentleman in question is shocked, and answers, “Your heart has always been in this work, and I’m willing to share your heart with your work, might dear—more than willing.”

If it’s a mostly pleasant, meandering tour of the relationships in Susan Wray’s life, this book doesn’t offer much that’s new or interesting; rather the opposite, I’m afraid, and it’s therefore mildly annoying to watch the same old story lines play out as predictably as they usually do. If only the plotting were better, Susan Wray’s hospital world would be a place worth spending your time.