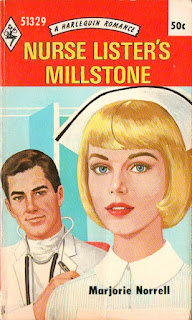 Elizabeth Lister had unexpectedly inherited an immense fortune—but, far from making her happy, it only had the effect of becoming a millstone round her neck!

BEST QUOTES:
“Don’t let all the good times slip past your fingers, child. When you get to my age you can catch up on all the chores of living.”

“Most Americans like to tour around a lot and see as much as possible in the shortest possible time, a few historic old ruins, places of literary interest and some very beautiful scenery.”

“Never act foolishly and pretend a compliment means nothing to you. Accept it as graciously as you would a gift of flowers or chocolates. Don’t give way to that foolish habit of disparaging yourself, just because you think it’s the right thing to do. Such an attitude only embarrasses the giver of compliment or gift.”

REVIEW:
Elizabeth Lister is an extraordinary nurse. She is so dedicated to her work that when her Uncle Harry unexpectedly leaves her $250,000—apparently a staggering fortune and not just a drop in the bucket toward your kids’ college educations—instead of quitting her job and enjoying the “lolly,” she continues to work, and considers how she might use her inheritance to “accomplish much to help mankind.” (It is curious, and perhaps due to a British sensibility, that leads almost everyone to conclude that Elizabeth is going to give away a substantial portion of her fortune.) Unfortunately, as soon as her friends hear about her good luck, they immediately shun her, “as though I’d some infectious complaint and they were afraid of catching it!”

The answer to this problem is, of course, for her to take a new job far away from her current situation, where no one knows about this “millstone,” which is how she refers to her money. There she meets Dr. Frank Tyler, who believes—the silly man—that “emotional involvement of any kind was definitely out so far as he was concerned for some years to come.” He’s planning on going into research, investigating leukemia, and has plans to apply for a grant from a pharmaceutical company, though that would mean all his discoveries would become the company’s property, to be sold for a profit. Elizabeth quickly decides she will use her money to build a clinic with a lab for the hot young doctor, no .

When he hears about this plan, Frank is overjoyed and deeply grateful! Oh, actually, no, I lied—in true VNRN fashion, he is outraged and cuts off their budding romance with little explanation, only later explaining, “I want to get to the top. But I aim to get there under my own steam.” It’s a ridiculous attitude, of course, because what is the grant that he is hoping to win but a gift? And isn’t every person’s success dependent on others—teachers, advisors, investors—who helped along the way? He compounds his hypocrisy by adding, “If you’d been anyone else, I might have accepted.” Elizabeth’s best friend points out that “he’s think himself doing the right thing, I suppose, if something horrible had happened and you’d asked him to share that!” These men can be so stupid, you wonder why you bother.

But it turns out that it doesn’t take long to convince Frank to accept the plan, though it still means they can’t be together, even though he loves her, but because he does not have “even a remote hope of being able to give you things, wealth, position equal to those you now have in your own right.” What a sexist snob!

The second half of the book is Elizabeth’s persistent efforts to win Frank over, which you know are preordained to succeed, though it takes the quintessential car crash combined with the old jealousy ploy to bring him around. The book is a pleasant read, even if it hinges on this ludicrous plot device. The characters are enjoyable, if not anyone I’d care to spend any extra time with. You could do worse, and it won’t be a complete waste of time, but it is likely to pass out of your head about as quickly as the money would have slipped out of your bank account if you had been the recipient of Nurse Lister’s fortune.