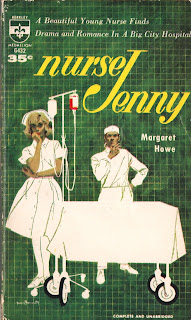 Jenny Dawson was pretty, young and blonde, but she had absolutely made up her mind to dedicate herself to her nursing career and to the little nephew who was left in her care … Then, in her new job at the famous Merriman Memorial Hospital, she met—Dr. Peter Hurley—broad-shouldered and serious-minded … and Jack Merriman—handsome, wealthy, debonair … The story of a lovely and courageous nurse who finds that  life can be very complicated indeed when one is devoted to a demanding career, and much more so when one is young, beautiful, and admired by two very attractive and eligible men …

“The knowledge that Jimmie would never be a mental case cheered her.”

“Jack told me I was silly not to have a pretty nurse. It’s bad enough to be here, without having to watch a homely woman for hours.”

“A pretty girl like you shouldn’t dedicate her future to a crippled child.”

“We’d better get out of here before the hospital gossips start a rumor that they caught me necking with a nurse.”

I have said before that a C grade is really the worst possible grade for a novel: not so awful that it engenders at least some emotion, not laugh-out-loud bad, and certainly not enjoyable, it plops squarely into the category of books that there is absolutely no reason to read.

Nurse Jenny Dawson has inherited her nephew, Jimmie, a four-year-old with cerebral palsy, from the boy’s mother Belle, after the father, Jenny’s brother, died in a truck accident; “how callous and indifferent Belle had been from the moment Jimmie was born. She hated him. She would have put him in an institution.” So Jenny had taken him, then depleted her savings and abandoned her job to travel around the country to see various specialists to try to get him care. Merriman Clinic has gotten her one remaining dime for “this last attempt to find someone who could help,” and sure enough, Dr. Peter Hurley agrees that Jimmie has the potential to learn to talk, possibly even walk. In return for his treatment, Jenny takes on a job as nurse at the next-door hospital, caring for demanding matriarch Nora Merriman, whose money has endowed the hospital, and who has broken her hip in a fall and “might easily become a cripple” without proper nursing care.

Nora’s son Jack is a cad, flirting with everything but settling on nothing, encouraged by his mother, who feels that nothing is good enough for her boy. He starts chasing Jenny, who goes on dates with him and appreciates his charm, but she is put off by his lack of seriousness. At the other extreme is Dr. Peter, who is nothing but serious: “He doesn’t seem to get a kick out of anything but his profession,” observes Jack.

Well, his profession … and Jenny, whom he repeatedly asks out for coffee, even starts hugging and kissing her, all the while telling her, “I can’t allow my emotions to trick me into anything which might endanger my ambition to be a successful doctor.” That’s why he likes Jenny, he tells her, because she “expects no more than I can offer.” What a tease!

Eventually Jenny’s savings are wiped out and she worries she will have to take Jimmie out of the clinic, where he now receives round-the-clock care and therapy three times a week, which has somehow brought him to a vocabulary of ten words from none. But Dr. Peter contacts some wealthy philanthropists who offer to fund Jimmie’s treatment as long as Jimmie’s mother Belle agrees. Belle smells the money that could be made off Jimmie, as Dr. Peter and the investors are thinking of starting a national charity to benefit kids with cerebral palsy and starring Jimmie on posters to draw public attention. (It’s a little weird that either by coincidence or deliberate rip-off, the author has hijacked the story of the Jimmy Fund, which began a decade before this book was written by utilizing a 12-year-old cancer patient to raise funds and awareness, even down to using the same name for the boy with CP.) Now Jack, Peter, and Nora are all working to save Jimmie from Belle’s clutches, all to win Jennie for themselves, as a nurse or a wife. Who will succeed? Well, you won’t be shocked to learn that it isn’t Nora.

The curious parallel between Jimmie and Nora Merriman is only briefly touched on, when Nora wails, “It’s the prospect of a future as a cripple that appalls me.” When Jenny reminds Nora of Jimmie’s deficits, Nora replies, “Thinking about others doesn’t make it easier for me to face the future,” and flops back into her satin pillows and eiderdown quilts.

In the end, Jimmie is saved from his mother, who is essentially bought off, and Jenny wins the man you know she will in the final three lightning-fast paragraphs. The characters are flat and the writing is wooden, which is surprising, given that Margaret Howe has put her name on the cover of 2011 Top Ten VNRN Visiting Nurse—though she also claimed three other mediocre books (Special Nurse, Debutante Nurse, and The Girl in the White Cap). The best thing about this book is the Harry Bennett cover, even if on my copy of this book the printing register is out of alignment, making it look blurry and alien. But what’s inside the cover is off as well, so that may be fittingly appropriate.