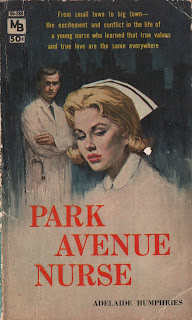 Handsome Jick Ainsley called Pam a “de luxe model nurse,” and even Pamela’s best friend Helen thought her too blonde, too pretty … even for a Park Avenue doctor’s office. Pam herself did not know. She had kept the small town values her Aunt Cora taught her, was good at her job, and Park Avenue was not really so glamorous until Dewa, the Indian prince, came along and taught her the words to the Indian song “… for my love will be like a wreath of flowers …” Then Pamela felt her life begin to change.

“With those classical features, that smooth blonde hair, and your perfect size-twelve figure, you look exactly as a nurse should look.”

“What women won’t fall for! It can be as thick as a London fog but if it comes from a man, they can’t see through it.”

“Pamela did not consider ‘to ooze’ an especially pleasing attribute. She knew, however, that this was high praise, coming from Helen.”

“No man, no matter what his nationality, wants a woman to be smarter than he is.”

“It might seem bold for her to be the only woman waltzing.”

“She believed that when you live in a world that might at any moment be blown to extinction, it is well to get to know and understand peoples of every country.”

“I like a woman with spirit—reminds me of a spirited horse. I’m very fond of horses.”

Pamela Scott is a nurse working on—you guessed it!—Park Avenue, in what appears to be a primary care office, one that “had been done by one of the best interior decorators,” with thick carpets and a subdued color palette. It’s the sort of practice that Pamela’s Aunt Cora—with whom we are frequently brandished but never actually introduced—would disapprove of, because “Aunt Cora’s idea of a nurse was strictly Florence Nightingale tradition. A lamp in the hand; a smile of compassion for the sick and dying; an unswerving devotion to duty.” Aside from the lamp, though, it’s not clear that Pamela’s present job doesn’t hit those criteria, so we’re left to conclude that Aunt Cora is a snob who doesn’t like rich people.

She’s not alone; Pam soon meets a man unfortunately named Jick Ainsley, who annoys Pam first by chatting her up at a lunch counter, then—more legitimately—by tracking her down at her office and making friends with the elderly secretary so as to pump her for information about Pam. He, too, comes from humble country beginnings and sneers that she would “work in a sham showplace like this, when she could be earning her salt as a real nurse.” Naturally, Pam finds him very irritating, thinking of him constantly and wishing he’d turn up so she could insult him some more.

Meanwhile, there’s an old friend from home who shows up and embarrasses Pam by acting the bumpkin at a French restaurant, talking too loudly and complaining that the food: “Whatever it is, it tastes okay, but it sure is rich!” He tells Pam with regret that living in New York City has changed her, and she agrees—though it’s not clear she shares his regret, because she appreciates the menu, and besides, “Pamela had become a part of New York, not only in her living and her work, but in her heart and mind. She could never go back to being the simple girl she had been, content with simple pleasures. She had outgrown them.”

At the other end of the spectrum is Dewa Christian, a prince from India, who is westernized enough after his Oxford education for Pam to consider as a potential boyfriend. He certainly considers her, inviting her out to his Connecticut country estate to meet his family and his cousin, whom he’s supposed to marry, according to his uncle, who takes Pamela aside to give her friendly hints like advising her that “my nephew’s horoscope and that of his cousin match perfectly.”

Jick turns up again, scaring Pamela by following her home and refusing to take his foot out of the doorjamb until she lets him in. After this charming behavior, she naturally warms to him, and he ups the ante by telling her he’s arranged a weekend getaway, and has already sent a telegram to Aunt Cora to let them know they’re coming, without discussing it with her first. She’s livid—because she already has plans with Dewa and can’t go. When he tells the office secretary, “I intend to change her name to Mrs. Jick Ainsley,” she’s even more pleased—and announces her intention to quit her job and take a poorhouse job he’d been pushing on her.

This book has a lot of problems, chiefly that it wants to have everything both ways. The attitude about Dewa’s family is not completely bigoted, and Pam professes interest in the culture—which is usually respectfully described—but the cousin is depicted as an intellectual fighting for women’s rights in India who “did not raise her eyes, but continued to gaze down upon her hands, folded in a sort of symbolic submission in her lap.” Pam’s bucolic upbringing, and Aunt Cora’s traditional Church-going values, are held up as holy, but New York is frequently described lovingly, and Pam feels that she has outgrown the lifestyle she was raised in. It’s not clear why Pam took the Park Avenue job at all, what’s wrong with it besides the fact that the patients are presumably wealthy, or why she decides to leave it in the end for a job in the poor part of the city. Pam is supposed to be an independent, strong woman, but she chooses a man who essentially stalks and domineers her, which I find hard to believe any woman, even one reading this book when it was published in 1956, would find attractive. It’s not badly written, but these fundamental flaws make it irritating enough to ultimately make Park Avenue Nurse far less desirable than its address.