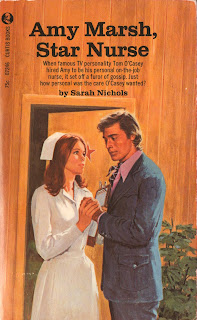 Tom O’Casey was a star. A bright, steady beacon in the changing firmament of show business. O’Casey was loved and adored by millions. And Amy Marsh thought her new boss equally entrancing. But soon she found herself caught up in a dizzying whirl of glamorous parties, expensive gifts from Saks—and the subject of ambiguous gossip columns. Was this really Amy? Dr. Harley Strait, Chief of Pediatrics at St. Clair’s Hospital, didn’t think so, and was determined to remove Amy from what he considered to be a corrupting environment …

BEST QUOTES:
“We’re just sending Amy home so we can do some hard drinking.”

“Give me your baggage check. I’ll get your things and meet you at the car. Give you a chance to gossip behind my back about how attractive I am.”

“Oh, he’s all right. It’s just that the moon is full. We’ll lock him in the attic when we get home.”

“How do you like the new uniform? If they dressed like this in hospitals, recovery would be twice as fast.”

“There you have it. From the horse’s mouth, so to speak. No disrespect meant, Amy. Horses are beautiful creatures. Especially fillies.”

REVIEW:
It’s a little hard to believe that 21-year-old nurse Amy Marsh could have so many men in her life. First there’s Billy Hendricks, high school sweetheart who’d asked her to marry him, but she’d run off to New York to go to nursing school and left him to become a drunk. Then there’s hometown doctor Frank Crispinian, whom she also refused to marry, but at least to his face: “I’m not mature enough to settle down and I have other fish to fry before I do,” she says. Next, but far from last, there’s Leslie Raymond and his 40-something-year-old uncle Judah Raymond, and Amy believes she come close to falling in love with both of them, the ick factor of this remaining unexamined. “Amy was the kind of girl to whom things happened,” we are told. If things means men, that’s not an understatement!

Amy works for Tom O’Casey, a television show host beloved by the nation but a bit of a creep; he’s always asking for kisses on the cheek and getting them, and telling Amy how pretty she is and that she needs a boyfriend because he “can’t have mopey girls on the staff.” Oh, and he’s more than twice her age. Amy’s job, if you can call it that, is “to make him take his medicine and remind him to relax when he gets too tense.” She also takes detailed notes daily on his condition, though it’s hard to imagine what the details are, exactly; “The patient was really tense today”?

You know a suitable doctor will wander in, and sure enough, she soon meets Dr. Harley Strait, a rich 35-year-old man with a limp from polio contracted in childhood, now chief of pediatrics. “He’d make a nurse’s life—infierno,” laughs Amy’s tactful Spanish-speaking colleague who clearly understands that Amy’s delicate sensibilities could not tolerate the word hell. Dr. Strait soon proves true to character; when Amy tells him about her job, he sneers—not without reason—“Make him take his medicine! For heaven’s sake, Amy.” But after the pair are both coincidentally on hand to assist a woman struck by a car, he takes her to dinner and then back to his manse, where he kisses her. Amy, who is a bit obsessive about what is “proper,” is unable to relax her lips because she’s alone in his house. The insecure doctor takes her cold freeze the wrong way and decides that her reaction is because he is handicapped, but in fact she’s thinking, “My, he’s got a beautiful physique.”

Then she’s kissing another man, Roger Hayes, good night after a date, and the ass tells her, “You can do better than that.” Worse, she tries again, then later tells someone at work that Roger is “not exactly” a “special friend,” “but he might be.” What happened to Dr. Strait? And why would you accept this jerk as a boyfriend? Next she’s trying on a dress purchased at Saks by her boss, Tom O’Casey, and agreeing to host O’Casey’s opening-night party at the Algonquin Hotel. Needless to say, when he drops her off at her apartment after the party, he kisses her. “It had been unexpected but not unwanted,” and Amy decides that she is “glad that she had responded to his embrace.” And then she makes a play for Judah Raymond at another party, maybe because he’s told her that she would never compromise her principles, and when he kisses her, “She felt her whole being giving itself up to him.” Five pages later she’s thinking she might marry Frank after all in a few years. Next she goes out with O’Casey again, and back to his apartment where he propositions her, but she tells him that she wants to get married, and he gently releases her and assures her, “I still respect and honor you, Amy.” I’m sure that’s what happened with all the women Harvey Weinstein brought to his apartment, too.

This book is just one endless string of dates with seven different men, a new VNRN record. (It also includes the private details of three showers during which the warm spray needles her firm young body, a sure sign that the book was written by a man.) I have no qualms about a woman sowing her oats, but it’s the constant hypocrisy of her endless declarations about her moral fortitude (she doesn’t like a movie because it has “that kind of language” and doesn’t “leave it to the imagination”) as she tosses herself from one man to another, thinking that every one of them is The One … until the next one comes along. She’s stung to a sobbing wreck when her first boyfriend Billy’s parents think that “I went to New York to become a bad woman”—she can’t possibly say floozy—and when several women suggest that she’s not the innocent she thinks she is. I think, though, that she is an innocent, inasmuch as a completely self-deluded moron can be, like when she thinks, “He was in love with her, she knew. And she had strong, tender feelings about him. But she was constantly forgetting about him while she lived in the city. She wondered if that meant something.” It means you are a shallow twit, honey. And at the end of the book when one of the seven men calls her up and asks her to move to London with him, you know she will, because “although her feelings about him were confused she knew that she wanted very much to be around him,” and she almost tells him “I love you.” Good thing she held back, though, because London is just full of men with cute accents, and Amy Marsh, Star Nurse, just can’t resist a man, any man, though it helps if he has a nice physique.