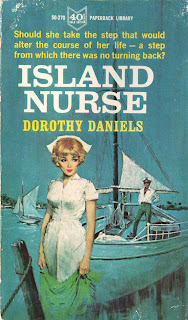 Nurse Diana Carvell studied long and worked hard to plan her future, but the blueprint didn’t include Ethan Sloane, who stormed into her life with the crashing impact of a wave against a rock. He affected her as no man ever had—not even Dr. Barry Latham, whom she expected to marry. Was she strong enough to resist this brooding, mysterious young islander who was carefully guarding a secret? More important—did she really want to? On a tiny island, at the height of a hurricane, a beautiful girl faces her moment of truth and makes a decision that will come as a thrilling surprise …

“There is something to the old movie and TV business of boiling lots of hot water. Keeps folks too busy to interfere with the doctor.”

“May I examine you? I promise the fee will not be too high and my medicines all taste like peppermint candy.”

REVIEW:
Diana Carvell is planning to marry Dr. Barry Latham, who is in his final year of residency as a surgeon. Curiously, though she works as an OR nurse, she has never been in the OR with him—until one day when she is on the scene when he inexplicably walks away from a routine appendectomy. Word is Dr. Latham doesn’t have the nerve to be surgeon—odd to be finding this out on his fifth year of residency—but then it is revealed that he was just upset because his dad James is being admitted with lung cancer. Diana is enlisted to care for James after his surgery, which fortunately cures him completely, and then the Lathams recruit her to come to their summer home on an island off the coast of Bar Harbor, Maine, to watch him recuperate. She agrees to do it, although it must be confessed “she was considering breaking off with Barry because of his mother’s complete rejection of her”—the woman has not been overly friendly when she comes to visit her hospitalized husband. But she and Mrs. Latham have a quick chat, in which she tells Mrs. Latham, “You believe I’m not good enough for your son,”—a strange way to win the affection of your maybe-future mother-in-law. But it works, temporarily at least, and Diana jets off to Bar Harbor.

She’s picked up on the pier by Barry’s longtime friend, Ethan Sloan. Ethan is about to start his fourth year of medical school—he’s running a bit behind because he insists on paying his own tuition without loans or help from any of his rich friends. Ethan has an overly arrogant manner, telling her on their ride to the island, “I’m going to marry you.” He continues this conceit without a break, except for the time he tells Diana, “I’m not that vain,” and she has to be helped up off the floor when she’s done rolling around laughing. Oh, wait, no, what actually happened is that she agreed to several dates with him, including a late-night swim and smooch on the beach, and before long she is “almost running in her eagerness to see him.” When Barry shows up days later, now finished with residency and planning to work at the island hospital here and there for the summer, she decides “there was no point in holding anything back,” and fails to mention the kissing or the fact that Ethan is planning on marrying her.

Barry is also a picture of contrasts. Though he is Boston “Back Bay, Choate, Harvard,” Barry had decided not to follow his father into finance, showing “a great deal of spunk and ambition,” but in school, “his approach to medicine and surgery was casual. He did work hard and well, but there wasn’t a need for him to excel above others so he never really tried.” When he shows up on the island, he pursues waterskiing and boat racing with reckless abandon, working toward the big boat race at the end of the season. But Diana has work to do caring for James and helping out at the hospital; “she’d never be content, as Barry was, to spend the whole summer simply having fun.” Soon enough, he misses a call to help a man with a gangrenous wound because he’s off on the mainland buying a speedboat—but worse than that, he also fails to come back in time to pick her up for the big dance at the Latham house!

Ethan’s there to dance with her, though, so not all is lost, and she tells him, “When I saw you, I felt like turning cartwheels,” the gymnastic floozy. Unfortunately she doesn’t have time to demonstrate because Barry turns up, Ethan disappears, and Alicia Atwell’s appendix acts up. Diana and Barry get her to the hospital, but then Barry starts acting squirrely—and though Diana talks him into the surgery, it’s “not the sure, hard sweep of the blade an experienced surgeon would have used,” and he worked “almost too carefully, Diana noted,” taking 40 minutes to do a surgery that could have been done in 15. Afterward, “he was shaken and drenched with sweat. When he removed his gloves, his hands were shaking.” (Shades of Nurse Ann in Surgery!) But then she remembers he’s been running around all day with his new boat, which must be why he did so poorly. And she lies to the island MD, Dr. Evans, when he asks for the truth about Barry’s medical skill. “Barry is a poor doctor, an incompetent surgeon,” he tells her. Curiously, Diana declares, “I don’t believe he’s a bad surgeon. I think he’s inexperienced, that’s all. I believe in Barry Latham, as a man and as a doctor.”

Dr. Evans decides to take a week of vacation, curiously at the height of the season when the island is most populated, leaving it alone to be mishandled by Dr. Barry. But just as Diana and Ethan are dropping him off on the mainland, a hurricane blows in—the worse storm ever! Will Barry be able to find a spine and help the injured? Who will Diana decide to marry?

I’ve been known to gripe because a huge disaster plays out in a few paragraphs, and now I’m biting my tongue—this one takes 15 pages, and it drags. Parts of the book had interest and real humor, but so much of it didn’t hang together—is Barry afraid or arrogant? Does Diana believe in Barry or doubt him? At least she’s not quitting her job after she lands her man, but neither man was much of a bargain, so it was hard to feel too pleased with her choice. Overall there just isn’t enough to recommend this book.