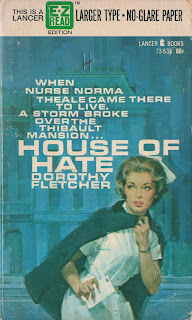 The stately mansion of the Thibaults held more than art and music. More than beautiful people … it held vicious undercurrents of fear and frustration. When Nurse Norma Theale came there to live, she was the catalyst. Around her gathered the storm, to burst in shattering fury. Because she was there, someone had to die. Would it be Norma herself Whose side was she on? Who was the enemy? Only Norma could find out—if she could survive the storm!

REVIEW:
This book is wicked smart (I can say that because I grew up in New Hampshire using that expression before it started appearing in ad campaigns). When you pick it up, I hope your French is not too rusty, or that you have a good translation app at the ready, though you’ll have to go farther afield to learn that crotte de bique means nanny-goat droppings. You might also need Wikipedia as well, to research Iras (the second lady in waiting in the Shakespeare play Antony and Cleopatra), Rouault (an Expressionist French painter), and Sidney Carton (the hero of A Tale of Two Cities by Charles Dickens). (If you understand the reference to Berenson’s theory of intuitional knowledge, let me know, because I could never figure it out.) But if this book was more intelligent than me, it is certainly not too dense to make for a lovely, enjoyable read.

Norma Theale is a 26-year-old nurse who begins our story by attending a concert at Lincoln Center to hear the Violin Concerto in D by Tchaikovsky played by violin virtuoso and heartthrob Nicholas Thibault. She’s about to interview for a job caring for his mother, Victoire Thibault, who is at death’s door at 68 from some unspecified illness that sporadically gives her fits of stupor. She’s drawn to the job because she is a true music aficionado who can identify and chat very knowledgeably about composers and artists, and would be living “under the same roof as the dark god, the legendary enfant terrible of the musical world. The celebrated, gifted artist, the withdrawn, controversial personality who fascinated music lovers and press with his disinclination to conform to type.” Furthermore, she’s completely fluent in French, which the immigrant family lapses into now and again; how an impoverished orphan came by all this education is never explained.

Norma arrives at the mansion on Fifth Avenue somewhere north of the Met, and the property is lovingly and meticulously described, “a darkly glowing jewel,” so it doesn’t exactly fit with the “House of Hate” title. The other problem with the title is that the people who live there are nice—matriarch Victoire, Victoire’s her 17-year-old niece Simone, her daughter Michelle, and Michelle’s husband Henri, are all very kind to Norma. Only Nicholas is cold and aloof, possibly because the rest of the family does tend to pick on him a lot. It’s revealed that he was an unwanted child, possibly the result of a husband-on-wife rape; Madame, in one of her delirious spells, thinks she’s pregnant with Nicholas and shouts, “I will not have the baby. When I bore him Michelle I loved him. I cannot bring his child into the world now. Conceived in hate, nourished in bitterness and loathing—” And though Nicholas is a world-renowned concert violinist, his family does not appreciate his career; they think that “what they did, the family considered work; what Nicholas did was simply fritter away his time on the violin, giving a concert now and then but hardly earning his keep.” Curiously, despite his fame, he has no money at all, and is dependent upon a stingy allowance from his wealthy but tight-fisted mother. The constant barbs from the family, the lack of love, and his inability to escape have made him a quiet, angry man, “frozen with anger and resentment,” Norma thinks, deciding, “A person could be pushed too far.”

But when Norma demonstrates her knowledge and interest in Nicholas’s music, correcting him that it wasn’t Busoni he was playing when she first entered the house but Mendelssohn, he takes an interest in her. He accompanies her on her daily walks, and they window shop and hunt for baklava. Their relationship warms realistically, particularly during a sweet afternoon in which she, Simone, and Nicholas play music together. But then two paintings go missing from the family’s art gallery, and Nicholas is accused of stealing them. Next Norma sees someone bending over Madame in her bed in the middle of the night, and Norma becomes convinced that Nicholas is trying to kill his mother. The climax comes on the opening night of a show at the gallery, when Norma is drugged and another murder attempt is made—during a lightning storm, of course!

The problem with these Gothic murder mystery nurse romances (and there does seem to be such a genre; see Matravers Hall, Nurse Missing,  Nurse at Mystery Villa, Nurse Incognito, Nurse Jean’s Strange Case, Nurse on Nightmare Island) is that they usually stink (I’ve given out two C’s and two D’s among the six). Happily, here we have a quiet gem. The book is sprinkled with a gentle humor that does not translate well for the Best Quotes section, and if only slightly moody and mysterious, the unfolding of Norma’s feelings is prettily described. Its only real flaw is that the author seems torn between painting a luxurious, elegant building and an eerie backdrop for her tale of mystery and love, making discussions of the house as “a beautiful horror,” “a prison, a cauldron of smoldering passions” with “gloom in the wide corridor” completely unconvincing. But ultimately, this is easily the best of this particular sub-sub-sub genre, another lovely offering from the masterful writer Dorothy Fletcher, who, when she is on, is easily one of the best.