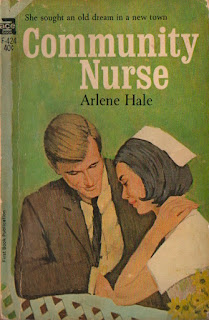 When Leah Larkin, R.N., left the large city where she had worked as an office nurse, she felt that she was following her lucky star. For the handsome Cal Havelin, a visitor to her city, had stolen her heart and taken it back with him to his peaceful home town. And Leah was certain that in the quiet valley her dreams would be fulfilled. Once settled there she would make her mark as a community nurse—and win Cal’s love. But Leah was soon to discover that reality never follows the smooth path of a dream.

BEST QUOTES:
“I’d like for you to meet Dad. He’ll like you. Even if he’s past seventy now, he still appreciates a pretty girl.”

“It’s indecent for a woman to look so lovely so early in the day.”

REVIEW:
Leah Larkin, RN, is fed up with city life! “Here patients were just patients. She barely saw them long enough to do more than administer to their needs and say goodbye,” she thinks as she packs her bags. I’m not sure if she’s expecting to sit down to high tea with every patient who walks through her door, but she seems to have some unrealistic expectations about becoming besties with them all. Based on these dissatisfactions, she’s decided to set sail for Green Hills, a small town hours away—which, not coincidentally, is where Cal Havelin lives. Cal is a man she had dated for a few months, but then one day he’d done the ’60s version of ghosting her: “It had been two months since he had kissed her good night with his usual lighthearted smile and told her he would phone again soon.” She’d never heard from him again.

But “Cal had become too important, too necessary and too vital to her,” so she’s pointed her car down the highway—and, upon arriving in Green Hills, into the path of a young boy on a bicycle. But it does mean she quickly scores an introduction to local medico Dr. Rod Goodman, who shows up to care for the squashed lad. She asks for a job as a nurse in town, but it seems they’ve already got one, with little interest in the services of another one, especially one who’d run over little Bobby Walker on her first day in town. Asked to vouch for her character, Cal shows up to claim her, tells her she’s beautiful, touches her face, and kisses her a couple times, “lightly, like a brother.” Instead of listening to the warning sirens, Leah rushes back to her motel room, “took a brisk bath and changed clothes to be ready for him.” Guess what? The phone doesn’t ring, and the door remains silent. Finally she picks up the paper and spots a photo of Cal with Deloris Wentley, “her arm linked possessively through Cal’s.” Oh.

Leah learns that Dr. Rod’s brother’s wife, Michele, lives with Rod, but all the nurses he hires to care for her quit before too long. Gossip is that Rod is a masher, but Leah goes out to dinner with him anyway, all the while pining for Cal. “Oh, Cal, where are you? Why do you let this happen?” she cries as she applies her makeup for her date. During dinner, Rod talks about the town’s underfunded hospital and points out that the Havelins are the richest folks in the area. As he drops her off, he says he’d like to see her again, and she answers, “So you can persuade me to ask Cal for money for your precious hospital?” Leah has seen the 22-bed hospital—little Bobby is lying there in a coma—which has only a couple aides and one nurse, who has told Leah that they are understaffed and underpaid, so it’s bizarre that Leah would take this high-minded attitude.

Cal shows up eventually and offers her a cabin his father owns and doesn’t use any longer. “Now come here and show your gratitude,” he commands, and she obligingly kisses him a lot. He invites her to his father’s retirement party, where Cal’s father Sam tells Leah that Deloris is bad news, that she is pushing Cal to make big changes at the plant. “She wants him to be a big duck on the pond. Ambition! It’s the root of all evil,” he declares, and it’s certainly an odd sentiment for a self-made man. Except it’s not Cal’s ambition that’s the problem. “Deloris has put him up to this,” Sam snarls. “Deloris and her high-minded ideas!” Why her ideas are so appalling is unclear, particularly as we’re told, “She was not a woman to be overlooked. There was a brain in her head, a drive to her will.” OK, that was a rhetorical question.

Outside of parties and dates, there’s not much for Leah to do, since no one wants to hire her. Fortunately, everywhere she goes, people get injured or sick, so she ends up nursing a man who’d had a stroke and a boy who catches a fishhook in the face, and therefore has lots of opportunities to see Rod. And it pays off—well, not financially, but Rod does tell her he loves her. She goes out on dates with him—and kisses him too—because “he was one of the most appealing men she’d ever known.” But “it was Cal she loved. Rod had been merely a substitute. That had to be it!”

The book has so many threads it’s like a Four Seasons bedsheet. One evening Rod and Leah are out together when Michele walks in with a date of her own. Rod inexplicably tries to drag Michele out of the place, her date beats him up, and Rod doesn’t fight back, saying that he “deserves” to be beaten up, but won’t say why. Rod asks Cal for money for the hospital, saying, “If there was a major disaster in this town, or some kind of emergency at your plant involving a good many of your employees, we couldn’t begin to take care of them.” Will these people ever learn? You never say quiet when you’re working at the hospital, and you never say disaster when you’re a character in a VNRN. Then the employees at the hospital start acting squirrely; one of them tells Leah, “You can tell Cal Havelin from me that he’d better get smart and start keepin’ his eyes open. He’s heading for trouble, big trouble. You mark my words, miss!” Little Bobby Walker, who’d come out of his coma and been discharged, relapses and has to go for brain surgery. Sam Havelin has a heart attack—did I mention Leah seems to be a jinx?

There’s lots more, including the inevitable d******* at the plant, a dramatic rescue from the flames, an alcoholic exposed, changes of heart, and a “long, low foreign sports model with bucket seats of flaming red leather.” And lots of kissing! In the end, this book feels more than a little frenetic, and it’s hard to forgive Leah and Cal’s hypocrisy, not to mention the villainization of Deloris because she wants to do more with her life than just play golf at the country club. Author Arlene Hale wrote about a hundred novels, and as I am fond of lamenting, many of them nurse novels—I’ve read 23 of them, 75% earning C grades or less, with another 11 waiting on my shelves, and probably at least as many out there in the world to be tracked down. My work is not all glitter and glamor—but especially not when I’ve got one of Arlene Hale’s books in my hands.