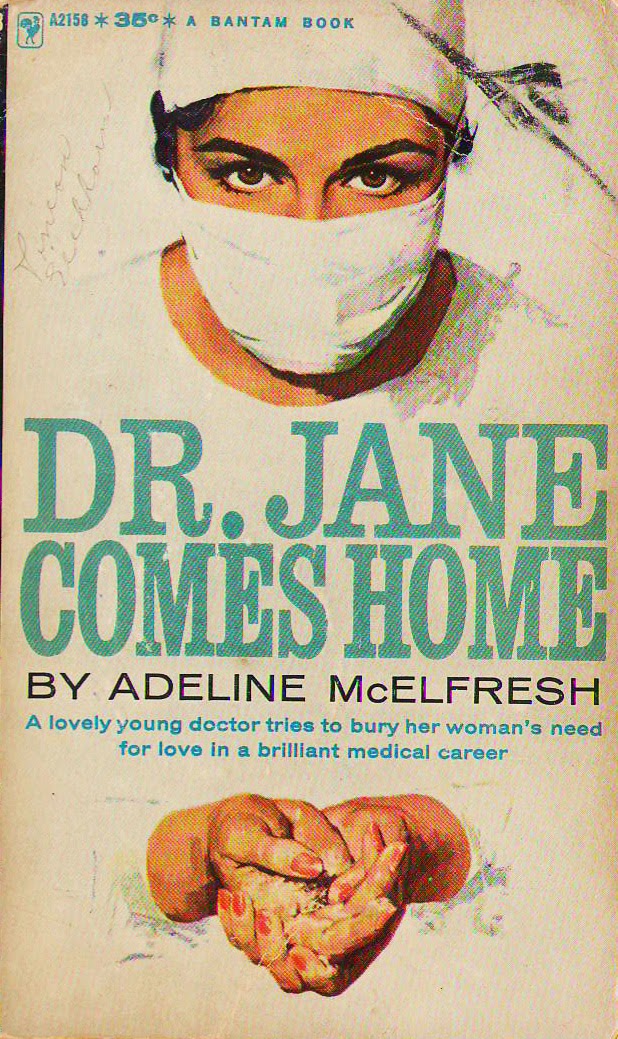 By Adeline McElfresh, ©1959
Woman or doctor? When beautiful, raven-haired Dr. Jane Latham returned to her hometown after her brief, tragic marriage she planned to devote the rest of her life to her profession. She was Jane Latham, doctor, she told herself. She had ceased to be Jane Latham, woman. But when Dave Riley, internationally famous newspaperman, came into her life he had other ideas. He begged Jane to renounce her vows and join him in his own cosmopolitan, easy-going life of fun and travel. Lonely, confused, filled with the ardor of youth, Jane Latham’s effort to deny her woman’s needs now met its sternest test.
GRADE: B
REVIEW:
I’m not sure what book the person who wrote the back-cover blurb (above) read, but it wasn’t the one I did. Maybe all that is forthcoming in the next (and final) book of the series, Dr. Jane’s Choice. In Dr. Jane Comes Home, it seems to be two years since her husband Bill died—done in by a crocodile in Africa—and one since she returned home to Halesville, Indiana, to resume her general practice. Journalist Dave Riley, whom she met in Africa before she left, has come with her, ostensibly to write an article about her but staying on because he loves this small town that much. Oh, and Jane too, but he’s waiting to spill the beans on that little secret, out of respect for her mourning.
Basically this book follows Jane as she manages patients and disasters, sheds an occasional tear over poor dead Bill, and otherwise snoops on minor Halesville characters old and new. A cast of more than 50 named people populate this story, which can be a bit confusing, but otherwise it’s a gentle, meandering story. At the end of the book Dave is in a serious car accident, which of course brings Jane’s latent love for him to the fore with her usual sappy “Oh, Dave, Dave—” which she has sighed again and again for every man who has passed through her heart, much to my increasing exasperation. We’ll see what dilemmas this new relationship brings to her in the final book.
It’s a pleasant story, but it doesn’t have much to offer: No offerings for the Best Quotes section; no real growth in Jane’s character; no interesting dilemmas, career or personal, for her to work out. It’s just more of Jane. Which, again, is nice enough—she’s smart, competent, independent, and strong—but unless you’re already this deep into the series and feel compelled to see it through, this book doesn’t really have much to offer.
Posted by Susannah at 8:47 AM