Nurse of the North Woods 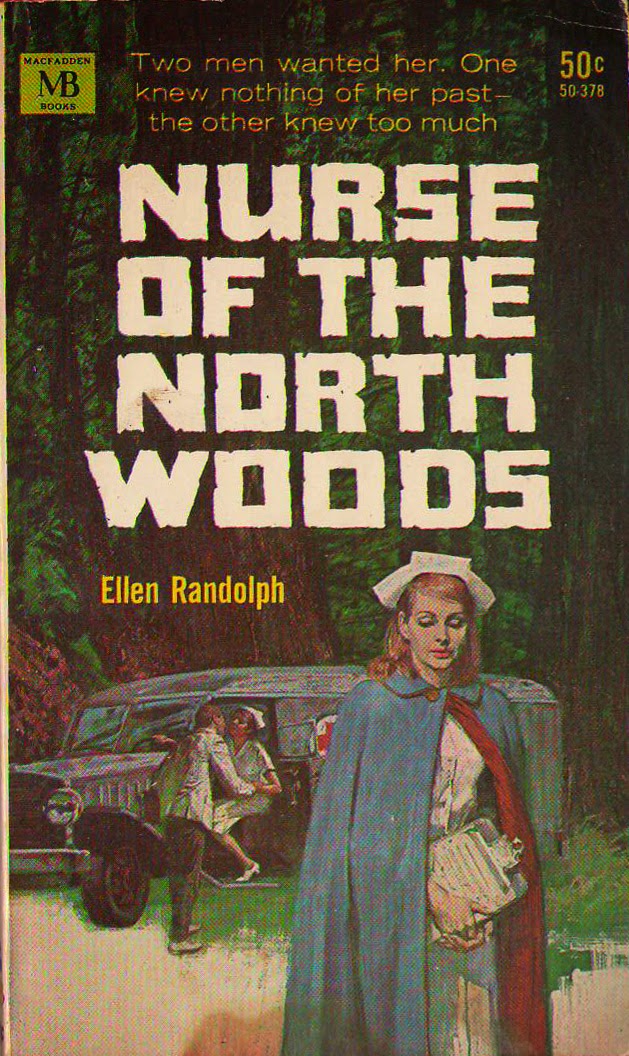 “I never knew how much you meant to me,” said Dr. Ralph Parton quietly. Nurse Nancy felt a glow of pleasure at his words, yet she tried not to let it show. She knew it wouldn’t take much to make Ralph openly declare his love for her. Then what would she do? Tell him the truth? She wasn’t sure she had the courage.
GRADE: B-
BEST QUOTES:
“You’re a pretty girl. Much too pretty for a nursing supervisor. I thought they were always old maids with thick glasses.”
REVIEW:
Nurse Nancy Rusk has been working in a small clinic about 40 miles from , for about a year. She had been working in , but “she had hurriedly decided to leave,” because “she had a secret that must be kept hidden and any relaxation on her part could mean she would have to flee from this new-found security and seek safety elsewhere.” She also plans to keep her secret from us, the readers, yet reminds us every five to ten pages of its existence, so by the end of the book you’re just so damned sick of her stupid secret that you can’t wait for her to spill the beans to her boyfriend and have it all tidily resolved in two paragraphs.
The man she has her eye on, Dr. Ralph Parton, likes her too, but she’s afraid to get involved with him because of her secret, of course, but also because of his sister Isobel. A stereotypical old maid at 42—right down to the gray tweed suit of mannish cut, flat-heeled brown walking shoes, and dour expression on the wrinkled and liver-spotted face—42 lying practically at death’s door—Isobel guards Ralph jealously, and Nancy is afraid that the ugly but intelligent woman will uncover and expose her infamous secret. Yet she doesn’t seem to resist all that much when Ralph offers to take her to dinner or on a drive alone, and certainly not when he kisses her in chapter three.
On the side, though, has to fend off the advances of the lumber mogul’s dissipated son John, who becomes increasingly predatory when she tells him she’s not interested in him. “I think we could have a lot of fun together if you’d only be reasonable,” he says when she turns him down for a date, and follows this up with a casual mention of the fact that he’d met her in Montreal. She continues to insist she is not interested, and he persists: “I’d think you would be,” he says, adding that he will see her later in the week, basically refusing to accept her refusal. After John drops by the house where she boards and tells her landlady that he’s written to ’s “friend” in , finally decides to come clean to Ralph, because “it was possible she might need his protection.”
After she and Ralph power through a couple of serious medical emergencies, they’re relaxing in his office in the middle of the night when she finally tells all: There had been a scandal involving a car accident in which she was falsely convicted, but the real problem is that her then-boyfriend, the actual culprit who had gotten off by blaming her, has been pursuing her relentlessly ever since; he’d ended by making a scene at the Montreal hospital where she was working and shouting that he would kill her if she didn’t come back to him, forcing her to quit and go on the run. Now that she’s finally confessed, though, all her problems are resolved in one fell smooch. Given the public awareness of the issue of abuse in the current day, it’s hard for the reader to dispose of ’s stalker so easily, and the relentless pounding we’ve taken about her secret becomes all the more irritating for its quick dismissal now that she has a new man in her life. If her problem were this easy to solve, why didn’t she just take care of it in the first chapter? I would rather have seen her just whip out a tiny silver derringer and put a bullet between the bastard’s eyes in a Florence Stonebraker-esque flourish, but it’s the very rare VNRN heroine who is guilty of even justifiable less-than-saintly behavior. Too bad, because it would make for much better reading, and this book is no exception.
Posted by Susannah at 9:19 AM