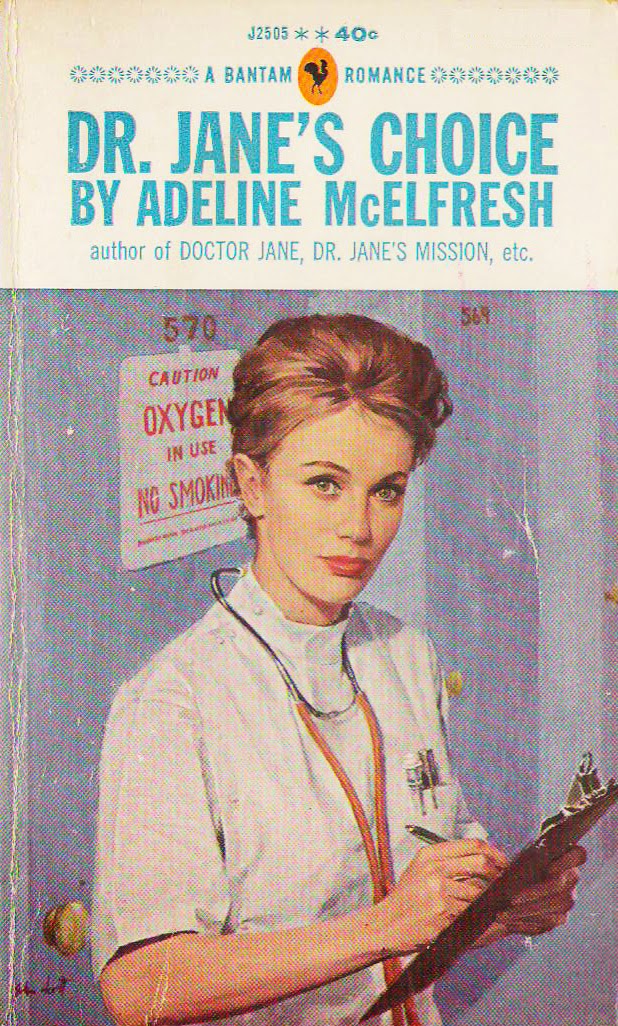 By Adeline McElfresh, ©1961
Cover illustration by John W. Scott
To hundreds of thousands of readers, Doctor Jane Langford (later briefly married to the Reverend Bill Latham) is the most beloved heroine in all medical romance literature. Sternly incorruptible, but often hesitant as she chooses what is right and what is desirable—a gifted surgeon and general practitioner, but a woman first and foremost—Doctor Jane strikes an answering chord in every reader’s heart, for Jane is more than a dedicated professional, she is a woman needing masculine strength and love. In this present novel, Jane is faced with the most important choice of her life—how she reaches that choice makes for one of Adeline McElfresh’s most engrossing novels.
GRADE: B+
BEST QUOTES:
“Don’t you talk her right arm off, Henry. She might need it in surgery in the morning.”
“She wanted to share his life, divide herself between being Mrs. Dave Riley and Dr. Jane Latham.”
REVIEW:
When we last left Dr. Jane Langford Latham, she was mourning her husband, Bill, killed in Africa by a crocodile, and I am not kidding. She thinks she’s falling for reporter Dave Riley, whom she first met in Africa and who followed her home to Halesville, Indiana, so as to write and wait for her to come around. But Jane isn’t sure, because she really, really loved Bill. So she takes a job at the nearby City Hospital—where she did her residency, by the way (see Dr. Jane, Interne)—as director of outpatient medicine.
In the course of her work, she discovers that a local woman who lives in the seedy part of town performs abortions, and goes on the warpath, declaring that she will “not stop until that woman is found, arrested, jailed.” Perhaps not coincidentally, a young pregnant woman from that same neighborhood is found drowned, and now the book turns into a mystery story. Whodunnit? Well, this local reporter, Charley Lewis, takes up the case, and the book is divided between following Jane and her patients, and Charley in his attempts to track down the girl’s killer.
I could go into more detail about the case and Jane’s success as a doctor despite her gender, but it’s not really important, and if you didn’t figure out what Jane’s Choice is going to be at the beginning of the last book, Dr.Jane Comes Home, then I won’t spoil it for you. The central question for the reviewer and the reader is, should you read these six books? The problem is that they are neither good enough to make the answer a clear yes, nor bad enough to make it an emphatic no. I always appreciate the quiet competence of the writing, which is occasionally humorous, and here we find a little inside joke: “If you two will excuse me, I’ve got Elizabeth Wesley’s new book. About doctors,” says the wife of Dr. Warren, her former attending in Dr. Jane, Interne. (Elizabeth Wesley is, of course, a pen name of Adeline McElfresh’s!)
The books are interesting, but they don’t have a lot of zest or camp to give them sparkle. I enjoyed Jane, but six books about her is a bit much, considering that the format or story of every book was essentially the same: All about Jane and her daily life, and then at the end, a big decision, usually more or less out of the blue, about some man, the “romance” being almost irrelevant to the rest of the book. The mystery that pervades the plot of this book is not a first for the Dr. Jane series—see Calling Dr. Jane—but it’s a bit of a distraction from what is supposed to be the central point, i.e. Jane. So if you don’t have a better book to reach for, go ahead and make the investment in Dr. Jane, but don’t expect her to leap off the page and dazzle you. She’s much too sedate for that.
Posted by Susannah at 8:46 AM