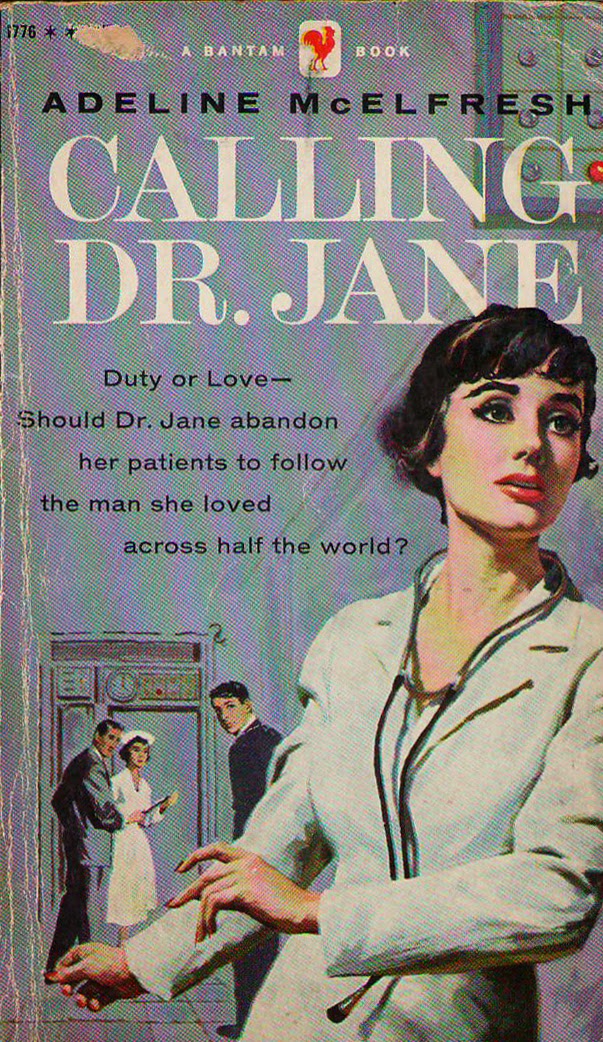 She was in love with her future husband, and Doctor Jane Langford eagerly prepared to join him at his remote African medical mission station. But then Doctor Paul Hamlin arrived to take over Jane’s busy practice. And as they worked side by side, the darkly handsome young doctor made no secret of his growing desire for Jane, his determination to keep her for himself. As Jane’s warm but errant heart responded to Doctor Paul she was faced with the greatest challenge she had ever known … Against the background of the busy, hectic world of modern medicine is told this challenging story of a young, beautiful woman’s search for truth and honesty.

BEST QUOTES:
“Being short and dumpy may have its compensations but I don’t know what they are.”

“So long as there is one person in the world, there will be senselessness.”

“There ought to be a law against you.”
REVIEW:
Having spent very little time with Dr. Jane Langford and Bill Latham, her fiancé, in Doctor Jane, I had hoped we might get to see them together in Book 3 of the Doctor Jane series. But no—on page one, Bill has been in Africa doing missionary work for the past three months. Back in Halesville, Indiana, Dr. Paul Hamlin, a refugee from New York, has stepped onto the scene, and is supposed to take over the practice from Jane, oh, about now. But Jane just hasn’t yet bought that plane ticket. And now Bill is getting letters from Jane, and “something was there, between the lines.” Oh, no, Mr. Bill!
Jane starts off by protesting too much—and soon she’s up to her schoolgirl-crush usual, swooning over Paul. And then, before too long, Jane is kissing him and picking out a new house for them to live in after they’re married, the fickle wench. Meanwhile, there are strange goings-on: An unnamed doctor refused to see a woman with appendicitis because she was poor, and the woman nearly died … a strange, overly wired man barges into Jane’s office looking for Paul … later that same night, the local druggist is bashed on the head and killed, but all his money is still in the drawer … someone is prowling around outside Jane’s house at night, looking in the outbuildings …
For the most part, this book is incredibly delightful. The writing is amusing and interesting, and the little, sharp details that Adeline McElfresh tosses in almost off-handedly create a brilliantly realistic picture; at times I wondered if certain passages weren’t an actual diary of someone’s day rather than a fiction story, they felt so true. Most of the time we are out and about with Jane, through the various hospitals and homes and doctor’s offices, meeting a fairly substantial population of named patients and hospital staff. In some books, these hordes of characters can become overwhelming, but here, we get enough story about some patients that we easily remember them when they pop up again later, while others drop quietly away, serving as a quiet demonstration of Jane’s reach throughout the community and its importance to her.
The problem, as has been with the first two Dr. Jane books, is Jane’s utter lack of maturity when it comes to her love life. She falls like a ton of bricks for men we’ve barely met, and even after she’s engaged to Paul, we still don’t get to know him very well. Rather, what sticks is the quick observations of the things Paul doesn’t like, which also happen to be the things Jane loves: “Paul said they were medieval not to have an office nurse, as well as a secretary,” “Paul frankly admitted that he had no idea country doctors got out and around so early,” “he thinks we’re pretty small potatoes,” “no wonder Paul found Halesville dull sometimes.” These little droppings never bode well, and you won’t be surprised to learn that they weren’t wrong here, either.
The mystery of the book is not at all surprising when it eventually unfolds—which it does in two lightning-fast pages at the end, too fast to follow easily—and the red herrings that had been so convincing as they appeared are just as convincingly disposed of. Adeline McElfresh is a top-notch writer and a real joy when she is at the top of her game, as she is here. It’s just Jane’s lack of any sense whatsoever when it comes to a pretty face that misses the mark. I keep hoping that as Jane gains more experience with boys—she’s now had four beaux—she will wise up some, but so far, no such luck. Let’s hope that her next stop, Africa, proves she’s learned a trick or two.
Posted by Susannah at 8:48 AM