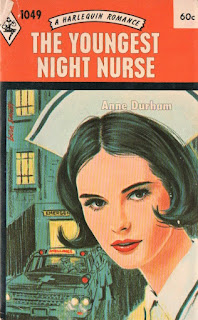 Beth Halliday didn’t know how she could have coped with all the bewildering details of hospital life without the kindly help of the Senior Surgical Registrar, Desmond Angrave … but she must beware of feeling too grateful to him, as she realized when his old friend, the beautiful Frandora Nye, became a patient in her ward.

BEST QUOTES:
“Perhaps it was even possible to make disaster happen, because of one’s state of mind.”

“Awful waste of nurse-power goes on in hospitals. Lots of girls get fed up and leave, to go into other  jobs or to get married. Not the best way of getting married, come to think of it.”

“Alas, we men don’t always look to the best in our womenfolk. We are foolish at rock bottom, and to be pitied.”

“A pretty woman should be clinging, anxious to please, but only too ready to take guidance from a man.”

REVIEW:
Beth Halliday is another VNRN orphan who, after her Gran died, took up nursing. She’s apparently a full-fledged nurse but is still so green they don’t let her care for patients—good thing, too, because she’s quite a bungler: “If anyone was going to drop the metal BPs as they were taken out of the cleansing machine, it would surely be Beth. If there was going to be burnt fingers or boiling water slopped on the floor when a hot water bottle was filled from the sterilizer, that, too, would be Beth.” As a result, she’s constantly being chewed out by the senior staff, and her gaffes are known throughout the hospital. The reason for this, one fellow nurse tells her, is that “you care so much and everyone can see it, and it just challenges them to nag at you for something or other.” She’s so good, she sucks.

Outside of the hospital, though, she’s confident, outgoing and friendly, to the point that she takes Dr. Overton, a “silly, pompous” pathologist “who shrank from social contacts” under her wing, and soon she’s having a friendly dinner with him, encouraging him to get out more and throw off the beaten mantle he wears. That’s a particular theme of the book, and Beth is always dishing out this sort of advice when she herself could use a big dose of her own medicine. To wit: Dr. Desmond Angrave, who has her heart turning somersaults from the book’s early pages, clearly has an interest in her that she cannot bring herself to see. Though he takes her to tea at the home of a dear elderly woman friend of his from his childhood, takes her to dinner and the theater and fishing, solicits her advice about gifts for an acquaintance, and regularly acknowledges that he’s looked up her work schedule to find out when she’s off, she’s convinced he’s in love with Frandora Nye, a beautiful young woman who is hospitalized with burns after a fire in a theater.

And that’s basically the plot. There’s more in the periphery as Frandora jerks around a number of men—she’s the beautiful, rich, and cruel type—and a loud, pretty, selfish male actor whom all the women—Beth herself included, briefly, until she spends time with him and realizes how shallow he is—are crushing on. There’s Christmas to plan for, and Beth’s misunderstanding that Desmond and Frandora are engaged—which a fall in the river followed by a two-day apparent coma quickly put to rights. While she’s out, she misses the Christmas concert where she’s supposed to play the harmonica for the children’s ward, but she’s engaged ten minutes after she wakes, so maybe that’s not such a bad trade-off.

The best thing about this book is its characters, most of whom are complex and interesting, and most of whom are saved by love in the end. The hero is not as strong as some—he has some nice quirks, like his deep interest in fishing, and he’s quite nice, but he seems to be about 15 years older than Beth, calls her “little Beth,” and early on refers to her as “this appealing child,” which gives me the creeps. He invites her to go fishing with him, but this means she sits on the bank for hours and watches him—as if fishing in itself weren’t dull enough! Furthermore, in another odd scene, after she invites him to “tell me about fishing,” he blathers on while Beth, completely inattentive, is hypocritically chastising herself for being a “good listener! That was all she was fit for! It was no use Mrs. Mackie trying to persuade her that beauty and glamour didn’t count, and that a man just wanted a good listener, a woman to consider him, make him comfortable.” Finally, nearly caught out in her inconsideration of him, she’s “alarmed in case the appropriate noises she had been making at intervals had been the wrong ones or in the wrong places.” This scene doesn’t give me a lot of confidence that their marriage will be an enduring success. At least Beth herself settles down as a nurse, starts to seem slightly less hopeless, and by the end of the book she “had stopped looking so drawn and anxious.” I waited with dread for the announcement at the end that she would be giving up nursing after marriage, but no such pronouncement is made on that point, though it would surprise me not at all if she did. So while overall this is a pleasant enough book, there’s not enough meat here to make it a satisfying meal.
Posted by Susannah at 12:47 PM