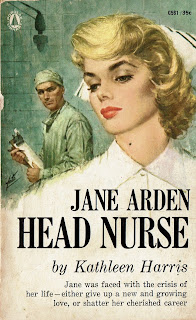 When Jane Arden took over as Head Nurse at the Friedmont Hospital, she knew that the job had many pitfalls. But it was an exciting challenge in a field she loved. Then she met Jeff Wallace, the young, outspoken Chairman of a strife-torn Hospital Board. Jane needed his support and his friendship. She saw him more and more. At first when people started to talk she didn’t care. But she had enemies who wanted to get rid of her any way they could. Suddenly Jane realized that her whole career was threatened—as well as her growing love for Jeff. Was it already too late?

BEST QUOTES:
“A good-night kiss didn’t necessarily mean anything; in fact, it was not much of a compliment to a girl when a man didn’t want to kiss her good night after such a pleasant evening.”

“A man liked to do the pursuing, and Tony, more than most men, got scared off when the women pursued him.”

“Too much time, I sometimes think, is spent over charts when it’s the patient that needs the nurse’s time.”

REVIEW:
On some things we can completely depend: Death, taxes, and that Jane Arden is an infantile, heartless borderline psychopath. Here in the fifth volume (good news! only two more to go!) to chronicle her endeavors to jerk around as many men as possible, we find that she has returned to Florida, the site of the previous unpleasantness in Jane Arden Registered Nurse, but to inland “farming territory known as the Glades,” because she was too embarrassed about her appalling behavior to return to West Palm Beach. No, that’s not it—she is as clueless and self-righteous as ever and dives right in with her usual rapidly shifting realities as pertains to her men friends: On the second page she is only “tentatively engaged” to Dr. Anthony Gray, the NYC surgeon she has left behind for a year to work as head nurse and director of a children’s hospital (though she has maybe three years tops experience as a nurse, none of it in peds). Why the waffling? Either you’re engaged or your not—and Jane can’t decide which version of reality is more expedient.

First she claims that bastard Tony “was almost too willing to wait that long to get married and had never actually asked her again” after his first proposal after the phone—but how many proposals do you need? And what about that time at the airport when he’d said, “Don’t go, Jane. Let’s get married right away and the heck with everything!” Well, that doesn’t count, and neither does her own lack of commitment—“Jane had been the one to insist that they wait before making their engagement absolutely positive.” She hasn’t even told her parents about Tony’s existence, much less that they’re engaged, and somehow she can’t bring herself to mention him to Jefferson Wallace, farmer and hospital board chair, whom she dates in what is on her side an allegedly entirely platonic guise, because “it seemed silly” to mention it. Besides, “telling him about Tony might spoil their friendship,” based as it is on the lie of her relationship status. “Why spoil the evening—and take the risk of spoiling others that might follow?” thinks the narcissistic and manipulative Jane. And if Jeff doesn’t know about Tony, Tony certainly knows about Jeff, as Jane brings him up every time she writes or calls, because “she didn’t want him to be too sure of her, after all!” “If Tony didn’t want Jane to see too much of someone else—Jeff for instance—he ought to come visit her in Florida,” though he is a very busy surgeon and she could far more easily pop up to New York for the weekend. With fiancées like Jane …

Even her acceptance of the position at the children’s hospital is bipolar as well: On one hand she and Tony “had agreed that it was best for Jane to obtain a little more nursing experience” before she is married, though “that would mean abandoning her beloved nursing career,” so it’s not clear why she needs more experience. But one page later we find “she had had to accept this new position because so much pressure had been brought to bear on her; it would have been next to impossible to turn down the offer.”

Anyway, after she arrives in Florida and scores a free ride to the hospital from Jeff—“when I start taking money from women—well, that will be the day,” he chivalrously declares—she allows him to think she’s visiting her sick child, never correcting his assumptions, though his own brusque, bossy and rude demeanor might justify her disinclination to engage more than necessary with the boor. Imagine her shock, and his, when she discovers he’s chair of the board, and he finds she’s the new director! He’s unduly pissy about it, feeling he’s been made a fool, and she’s unduly nasty back, likely because even if “she looked just like the Angel of Mercy men dreamed about waking up to find holding their hand and smoothing their fevered brow,” “here was one man not affected that way. Jane might just as well have been ugly and old and fat,” as if it’s justifiable to treat anyone rudely—but that’s not the point! How dare he! So when he eventually apologizes after the board meeting where they are officially introduced, “Jane’s response was cool and reserved; she had no intention of meeting him halfway, or showing that his apology was accepted.” When he asks if she minds if he smokes, “Jane did not mind in the least. But just to be perverse, she said that if she did not mind, she would prefer that he didn’t smoke. It amused Jane to have the upper hand even in such a small incident.” I really hate Jane Arden.

Though the warning signs are writ large, Jeff asks Jane out on Christmas, even though she’s promised to wait by the phone for Tony to call. New Year’s Eve finds them out together again, and soon Mrs. Griffin, shrew member of the board, is warning Jane that she’s being “indiscreet” by dating Jeff, though I’m not sure exactly what the objection is, but it appears that it’s having a personal life that’s objectionable. “It never pays for a young woman to get herself talked about. It is so easy for a girl to lose her good name. Men don’t always consider that they may be placing a young woman in a difficult situation so it is up to the woman to protect her good name. Then there is the good name of the hospital to be taken into consideration.” The morals police really go ballistic when Jane brings Tony to her sister Roberta and her husband Nicky’s house for the weekend. (Jane, true to her narcissistic form, takes complete credit for Nicky’s transformation: “She had turned a playboy into a man” when “she had been the one to encourage him in his art an insist that he take it up in earnest.” The truth being, as usual, not that at all: Jane had jerked Nicky around for a while, trying to decide if she should marry him even though she didn’t love him, eventually dropping him for the bird in the hand that was Dr. Tony, and now her insistence on their “brotherly-sisterly attachment” smacks a bit of sour grapes, since it was her sister who snatched him up after Jane kicked him to the curb.)

All but calling Jane a slut, Mrs. Griffin insists that Jane resign at once. However, encountering a crazed father sporting a sawed-off shotgun in the hospital one night, Jane saves the day and the entire hospital from a senseless massacre by karate-chopping the gun out of his hand. Now the town hero on top of local darling (after a newspaper article touts her finer points, which appear to be the facts that she is descended from Revolutionary War-era ancestors and that her brother in law is worth millions), Jeff pulls out his testosterone and “spoke in the masterful masculine way that his Jamaican houseboy had said a woman liked her man to use.” (And with this, continuing the pledge I made after reading White Doctor, I mailed off a check to the NAACP.) Jeff insists that Jane take to her bed after the incident, and “what could … a gal do when a man was as masterful as Jeff?” So when Masterful Jeff proposes, “now was the time to tell him about Tony,” but nope, instead she agrees, realizing that he’s the first of her string of unlucky beaux who feels she should keep nursing, and so she suddenly finds “a love she had never known before; a mature love,” though it can’t be that mature, a word we would never associate with Jane, because she decides she’s not going to tell him about Tony, “not now,” and though she decides she would have given up nursing if Jeff had asked her—having it both ways—in response to his proposal of marriage, she replies, “I think we should have three.” Children, that is. Jeff, rather than bolt for the nearest exit, seems stunned but remains rooted to the spot, so he’s stuck for now, until the next book and the next sap hoves into view. I count myself one such sap, since I’ll be there to witness Jane’s next infuriating adventure.