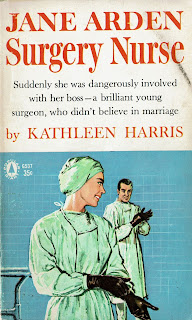 All the women who knew Dr. Tony Gray agreed that he was too attractive for his own good—yet none of them could help falling under his spell. When Jane Arden met Tony, first as his head surgical nurse, then as his latest romantic interest, she felt his belief that marriage didn’t mix with medicine made him “safe” for a girl who had an understanding with another man. And then, abruptly, she found herself up against the most difficult question a girl ever faces …

BEST QUOTES:
“Most of them, especially if they happen to be young and pretty, only take up nursing because they think it will pay off—in good wages, extra bonuses from grateful patients, eventually a husband!”

“So you’re a doctor! Small wonder that so many girls take to nursing.”

“Most girls, as you claim, are smart enough to make the most of their appearance. But some still are not as smart as their grandmothers. … Your grandmother was too smart ever to do things better than a man.”

“[Nurses are] big husky individuals who look down on everyone disapprovingly as though he was covered with germs. As a rule, they are quite unattractive, too.”

“‘Age of the Ultimate Weapon,’ she reminded herself, as one commentator had called it. An age so hurried there was little time for people to be kind to one another, a frightening age, with satellites being sent into outer space and talk of people going to the moon, weapons being created whose power was unthinkable.”

“You must be happy in your new job, watching the doc cut people up.”

“Men should realize that it often takes a woman to help them reach the top.”

“Perhaps she put too much of herself into her work. Perhaps there was not enough left over for a real life, aside from her chosen career, a home of her own, her own man, her own children. Every girl wanted these things more than anything else.”

REVIEW:
Jane Arden, who should be called vagabond nurse, has moved to New York for this book, after stints in Ohio, Florida, and Tennessee in the first three. Again she’s moved into her sister’s apartment, as she did in Florida for Jane Arden Registered Nurse, Roberta also possessing a serious case of wanderlust, as having herself moved from Miami to New York, she’s now set off for Europe and left her empty apartment to Jane. We learn early that heartthrob Dr. Tony Gray is not going to be a problem because “Jane was immune to men,” but we know better! Early on she catches Dr. Tony’s eye because they work in the same OR, and agree to be friends because neither of them wants to get married—Tony because he’s concentrating on his training, Jane allegedly because two years later she is still in mourning her childhood sweetheart, whom she had agreed to marry in JARN despite the fact that he’d turned out to be a complete ass before conveniently dying in a plane crash, but I suspect that in fact it’s because she does not have a heart. You will not be surprised to learn that on her first date with Tony—which of course she accepts because they’re just friends and will never be anything else—Jane shows her true colors when, at a party thrown for her by Roberta’s friends, “Jane couldn’t help a certain coolness from creeping into her voice. She was disappointed in Tony. She had wanted to accept him as a friend. But his actions this evening made this practically impossible.” His big crime? Roberta’s married friend Carol Gaylord flirted with him. The nerve! When he asks her what’s wrong, she lies, “You must be imagining things.” Did I mention that I am not particularly fond of Jane?

In JARN Jane had met young millionaire Nicky Powers, who had inexplicably fallen in love with her, but in book three, he’d packed off to Europe to study art. He’d promised to beg Jane to marry him when he comes home, which he has not yet done in this series. Jane has nothing other than sisterly feelings toward Nicky, yet when she learns that Roberta has met up with Nicky in Paris, she again demonstrates jealous possessiveness of a man she says she doesn’t want. Now, suddenly, “Jane still did not know how she felt toward Nicky,” her jealousy apparently changing her feelings, especially now that a previously smitten man’s ardor for her may be cooling.

When Jane comes down with the flu, Tony shows up at her apartment to take care of her. Though she is still angry with him, she lets him in, because “what could she do? A nurse always obeyed the doctor.” So now they are dating again, and Jane continues her self-delusion that she isn’t jealous of Carol, and also perpetrates an ongoing stream of obvious lies to Tony about her feelings about his friendship with Carol: “It doesn’t matter, Tony. It’s none of my business,” she tells him, while all along she’s thinking he’s “pretty dumb for being taken in.” Eventually they are kissing with an “exhilaration that had taken her on a trip to the moon.” But when Tony is appointed the new chief of surgery and is too busy for dates, here she goes again, “wishing that Nicky would come back from Paris. Maybe she would discover that she did love Nicky. Jane was tempted to urge Nicky not to stay away much longer. She knew if she wrote that she needed him, Nicky would not delay his return.” If she doesn’t actually love any of her boyfriends, she certainly does love to jerk them around.

Turning back to her other puppet, when Tony asks if he can come to her apartment one evening, she goes all out with the standard VNRN fare—salad, steak, cherry pie—and throws in candles and flowers to boot, for a man she repeatedly states she is not interested in. Her ploy works, and Tony tells her, “I’m crazy about you. Please say I don’t have to fight it any more.” Interestingly, she interprets this as some sort of proposal: “They would have to make plans, now that they were in love.” He comes over for dinner a lot, though he never mentions love or marriage, and Jane is outraged when he tells her he’s moving out of his slum apartment and taking a six-month lease on a nicer place a few minutes from the hospital. “Jane felt her heart tighten. Plans like these certainly did not include her. What she wanted to say—to cry out—was, ‘What about us, Tony?’” As if a six-month lease equals a breakup. Honestly, this woman and logic have never even shaken hands. Naturally, she just lies some more: “It sounds pretty grand,” she tells him. But she won’t go there to see Tony, because even though “some girls would think nothing of going to a man’s apartment,” nice girls like Jane, who invite men to their own apartments several times a week, have bizarre double standards.

As much as she wants to put that collar on Tony, she’s doesn’t know how she feels. “Was she in love? she asked herself. She must be. She was almost deliriously happy when she was with Tony. Tony needed her; he had come to depend on her. And it was good to be needed. David had never needed her. He had been so self-sufficient.” And her waffling continues when she decides that “she hoped that when the time came to renew her contract as a surgical nurse, she would be quitting, to be married.” Which she had ardently insisted when she was engaged to her first fiancé that she would never do—though you will be completely astonished to learn that she had never actually mentioned it to the man. And yet she still doesn’t know what she’s going to say when Nicky comes home and proposes. It was all I could do not to hurl this book across the room.

Roberta returns to New York—catching Jane and Tony in the clinch—and Jane can only say “I guess” when Roberta asks if she loves him. To clarify, she explains, “Tony has an allergy when it comes to marriage,” so it seems that “love” to Jane just means “husband.” Roberta decides she is going to help Jane get Tony to propose, and before long Tony is angrily dragging Jane out of the hospital to demand to know why Jane has not told him about “this fellow.” Jane cannot stop with the lies. “What fellow?” she asks. “Are there more than one?” Tony roars, and you know there would be, if Jane could find them. It comes out that Roberta has shown Tony a cable saying that Nicky is coming home and Jane should make arrangements for the wedding. Rather than tell Tony the truth—that’s so not Jane’s way—she snaps that there’s no relationship between her and Tony because “during the very first talk we had, you informed me that you had no intention of becoming involved with anyone.” He reminds her that she said the same thing, and she stomps home. Roberta is pleased with her work: “The best way to get to the bottom of anything is to give the other person a severe jolt—and the fact that Tony took it so much to heart is a good sign.” The only shock here is that Jane then tells Roberta that she can’t marry Nicky. Roberta only gently chides Jane for keeping him dangling for so long, and then mentions that she herself is going to marry Nicky “since you don’t want him. Naturally, being a gentleman, he had to wait until you turned him down before he could ask me to marry him.” So it seems Roberta’s “jolt” was delivered to two people, not just one. These Arden women are cold-blooded killers. Roberta’s wedding goes off in two paragraphs, and Jane makes it clear that though Nicky’s aunt and uncle cable their congratulations, “Jane had been their first choice.” What a self-centered bitch Jane has turned out to be!

Tony hears about the wedding and calls Jane to tell her for the first time that he loves her, but Jane is going to jerk the hook around a bit and asks him if Carol is keeping him from being lonely. “Didn’t I just tell you I love you? What else do you want me to say?” he asks her. Jane, of course, “could have told him, but she didn’t.” Tony, however, is not too dumb to read between in the lines, but too dumb to run screaming from the horror show that is Jane Arden, and he actually proposes. Jane “caught hold of a chair to keep from toppling over.” Then she makes snarky remarks about waiting six years until Tony has become a successful surgeon. “Jane still thought it a good idea not to let this handsome young man be too sure of her,” so she refuses to answer him, saying they will talk about it when she gets home from her sister’s wedding. “She knew she was going to have a good cry as soon as she hung up. But this time her tears would be tears of happiness—all was well with Jane Arden’s world once more.” Unbelievable. I’m going to cry, too, but only because I’m going to have to read three more books about Jane Arden.
Posted by Susannah at 12:42 PM