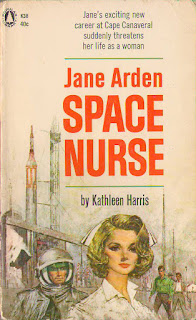 Book 6 of 7
By Kathleen Harris, ©1962
Cover illustration by Lou Marchetti

As Jane embarked upon the most exciting adventure of her career, she was forced to postpone her marriage to handsome Jeff Wallace. Jane had no way of foreseeing the personal crisis that would confront her as a “space nurse.” Nor could she have anticipated the lasting impact of the two attractive astronauts she met at Cape Canaveral. Fascinating Clyde McLaren, a strong candidate for the moon shot, was brilliant and quite friendly. —Or did he want more than friendship? And what of the dashing continental Lieutenant who made it clear that he was more than interested in her? —Just where did his interest lie?

BEST QUOTES:
“Any daughter of mine is going to devote her full time and attention to looking after me.”

“It sounded fantastic to Jane; she did not think such a project as setting up medical centers in space could happen soon—but then, not many people had though there would be television, jets, atomic bombs, missiles, wonder drugs for most fatal diseases—all the miracles of this Space Age.”

“I like your independence—it’s a challenge to a man. Every man prefers to do the chasing.”

“This whole affair was given so much publicity that a lot of suspects—enemies of our country—will be rounded up.”

“I imagine any man—anyone in pants—would do for the fair Jane. She likes to dangle all the scalps she can at her belt.”

REVIEW:
Nurse Jane Arden, who in previous books in this series had been assiduously striving to nail down the top berth on the Worst VNRN Heroines list, has in Jane Arden Space Nurse not been putting in the same superlative effort we’ve seen on our past encounters. I’m not quite sure how I feel about this. On one hand, I have avoided the usual indignation and ire that Jane Arden usually inspires. On the other, this fairly bland, obvious story is like a bowl of tepid oatmeal, arousing little emotion at all apart from the rare eyeroll. Is it better to spend an hour with a book that at least gives you the moral satisfaction and mental exercise of picking apart all the hypocrisy, lies, and infantile behavior that in past books made up the bulk of Jane’s character, or to sleepwalk through a book you won’t remember in an hour? That is the question! Who knew nurse novels could inspire such heady philosophical debate?

Anyway, here we have Jane, of all the nurses in the country, summoned to Washington to take a post supporting the space program at Cape Canaveral during the race with Russia to put a man on the moon (indeed, during this story, Jane watches the takeoff of Gus Grissom’s suborbital flight, America’s second, on July 21, 1961). I’m sure it was Jane’s training in surgery and pediatrics that made her a top candidate.

She boldly accepts the job without asking the permission of—or consulting, even—her fiancé, Jeff Wallace, the latest in Jane’s string of toys. But he and her family “had come to accept the fact that Jane’s career as a nurse had to be given first consideration,” though she’s been perfectly willing to chuck it for her first two fiancés. What this really means is that Jane does whatever she wants with little regard for anyone’s feelings, which we certainly have seen again and again in past books.

“It does seem to me you could have waited until we talked it all out before you went off into space,” Jeff pouts, but Jane reminds him that girls don’t go into outer space, silly! It’s her “obligation as a patriotic citizen” that compels her to accept, so off she goes to Florida to engage in duties so secret that even the reader hears little of them, apart from acting essentially as doting maid to heartthrob astronaut Clyde McLaren, cooking his breakfast, following him around all day while he undergoes strenuous workouts, and checking his blood pressure afterward.

While she’s waiting for Clyde to finish his day in the mock capsule, Jane accidentally blunders into a top secret conference room to relax in the big cushy chairs there, but is found by a Marine captain and bawled out. Later, out of the blue, she tells Clyde that she saw someone else in that room, Lt. Seth Zboski—“don’t look so startled; he’s a Czech”—who happens to be her roommate Nancy’s boyfriend, thought that doesn’t stop him from putting the moves on Jane, or giving her “The Look” every time he sees her. Clyde urges Jane to tell the Top Brass (a phrase that here is always capitalized) what she’s seen, and after doing so, she is chewed out by another captain. After this experience, “she resolved that if she ever saw anything else that looked suspicious, she would keep it to herself. She wouldn’t even tell Clyde, her best friend at the base.” If you see something, for Pete’s sake, don’t say something!

Months pass and Jane and Clyde’s friendship deepens, and there begins to be a little talk around the base—and Jane’s reputation is not enhanced by the one weekend when Jeff comes to visit. They go on a weekend driving tour of Florida, and the pair are scandalously forced to stay in the same hotel, in separate rooms “at least twenty-some other units in between,” so Jane decides “there really was nothing wrong in Jeff’s staying at the same motel where she was registered.” Wrong-o! A bunch of the guys are also staying at that hotel and see them having breakfast together the next morning, and now Seth Zboski is slandering her all over the base: “A man seldom marries a girl so free with herself,” he sneers, likely wishing he were in on the action. So Clyde is assigned to a different nurse and Jane is asked not to see Clyde at work or outside of it. Clyde, upset that Jane is suddenly giving him the cold shoulder—because no one has bothered to clue him in—drags her out on the beach to ask her what the hell, and true to form Jane lies, saying that it was her idea because they’ve been seeing too much of each other. When he responds by saying that she’s cold and uncaring, she tacks back again: “She could not let Clyde think she was like that, insincere, shallow”—in short, the truth. But their conversation is cut short by a thunderstorm and they are forced to shelter, clutching each other desperately, under a sand dune: “not intentionally, she was sure, he gathered her closer. Nor did she mean to cling to him.” Now Clyde proves himself the biggest person in the entire series, for as the rain clears away he agrees, “We cannot be friends,” and when he adds, “I could have loved you, Jane,” we are relieved for his narrow escape.

Then on to the big climax, when Seth Zboski is driving erratically all over the base in the middle of the night and Jane is the only one who notices, and “maybe it was her woman’s curiosity that led Jane’s feet toward the building and inside” to, you guessed it, The Top Secret Room, and watches him sneak out with a briefcase.  Since she’s decided not to report anything suspicious, she goes back home and to bed, because if she reports anything again, “the Marine captain could have her dismissed in disgrace by manufacturing some cooked-up story against her character.” If the captain has been reading these books too, he won’t have to cook up anything, and Jane’s poor judgment in this situation is more fuel to the fire. The next morning, Nancy tells Jane that Seth has given her something to hold for him, and he is going to stop by tonight to pick it up. “Jane had decided there was nothing she could do about it,” so she spends the entire day cleaning the house, and just when Seth is likely to stop by, she starts snooping in Nancy’s bedroom, finding the case just as Seth walks in. A struggle ensues in which clever Seth pulls out a bottle of clear liquid: “What fiendish thing did he have in mind?” Well, first of all, it’s his monologue, which starts out, “You ought to thank me for putting you out of a world gone mad—a world that will be destroyed before long, anyway, wiped out by a single nuclear bomb.” Just as Seth is forcing the liquid down her throat, the door is broken in by Clyde, who’s been spending the day outside Jane’s apartment, mysteriously convinced that something was going down, and had seen Seth grabbing Jane through the window. Seth escapes, but is eventually found stabbed in the  back—not by the Army, but “some of his own people who caught up with him. I suppose when he didn’t turn over the papers he’d stolen, there was nothing for them to do but put him out of the way. That’s the way these Commies operate, you know,” explains Jeff, remarkably in the know for a civilian. Not to worry, though, if the enemy is clever enough to get into secret places, because they’re also “usually, in the end, dumb enough to pull something wrong.”

The only flashes of indignation this book inspires are dulled by the fact that statements in this book do not accurately portray Jane’s appalling past behavior: We hear that Jane’s sister’s husband Nicky “had thought, for a brief period of their friendship, that he was in love with Jane, although she had known all along that theirs could never be anything more than a brother-and-sister relationship”—completely ignoring how Jane had toyed with Nicky and never relieved him of the impression that he was obligated to propose to her when he returned from his studies in Paris in Jane Arden Surgery Nurse, only dumping him when she had a better prospect in hand, some doctor guy she was sort of engaged to for about ten minutes.

My favorite part of the ending was the part where Jane vows, “From now on, she wouldn’t keep anything from Jeff. And this was one resolution she meant to keep.” And immediately breaks it by deciding that she won’t mention near miss with Clyde. “Later, she would tell him about Clyde.” I also enjoyed how in the end Nancy hooks up with trainee Carl, who has dated Jane already, and was dismissed as “not much of a conversationalist. Carl never had anything to say; he kept in the  background. In Nancy’s opinion, he was something of a droop.” As a discard of Jane’s, Jane is very happy to “thoroughly approve of her roommate’s choice.”

The best news of all is that there is only one more book to go in the Jane Arden series. Even though I’m starting to think that, as the heroine I love to hate, I might actually miss the infuriating, hypocritical, lying, shallow, manipulative Jane Arden.
Posted by Susannah at 12:31 PM