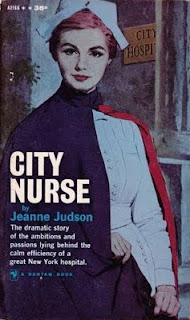 The imperious ring of the telephone shattered the silence of the sleeping ward. It was a message for young, red-headed Nurse Dora Tracy. “Report to Emergency at once. Dr. Terry has asked for you.” The victims of a terrible explosion were being wheeled in when Dora took her place beside the young surgeon. Silently, with practiced skill, she responded to his brusque commands. As always, Dora thrilled as she worked beside this stern servant of medicine. He had taught her the deeper meaning of their chosen profession. But Nurse Dora sometimes wondered if their shared dedication could substitute for love, the love shared between a man and a woman.

BEST QUOTES:
“Sanitary engineers, good old plumbers, have done more for the health of the world than all the doctors since Aesculapius.”

“All the interesting men died three or four hundred years ago.”

“He spoke in the cheerful way that doctors always do about other people’s pain.”

“Men are a necessary convenience.”

“She walks as if she had joints all the way down.”

“All men look like thugs when they aren’t shaved.”

“Little girls were wriggling their thin hips, twirling bright-colored hoops, a passing phase that had hit the juvenile world like a pestilence, or like those epidemics of involuntary dancing that had manifested themselves in the Middle Ages.”

“Don’t think that I’m a philanthropist. I’m not. But it’s the fashionable way to avoid income tax right now. First, you make a lot of money and then you start giving it away—not to the people you took it from, naturally.”

“Don’t modern doctors trace every ill, physical and mental, to the pernicious influence of parents and guardians who do not understand their children half as well as welfare workers and psychiatrists?”

“No man will admit that it is mere beauty in a woman that attracts him. He always tries to pretend that he is fascinated by her intellect or her character.”

“ ‘She lives in the Bronx.’ She might as well let him know the worst about Mercedes at once. There were lots of men who would rather drive to Boston than to the Bronx.”

REVIEW:
Nurse Dora Tracy has left her home in Hartford and moved to New York to take a job at Manhattan Memorial, on the men’s surgical floor. Dora is quietly efficient, which is noticed by Dr. Terry, who himself is a machine: “The other doctors would usually make one or two casual remarks just to show that they were human beings as well as doctors, but Doctor Terry never wasted a word.” He calls Dora down to assist in the Emergency Department one night when a ship in the nearby harbor explodes and two dozen burned sailors are brought in—and one young man who is clearly not a sailor. He is well-dressed and handsome, carrying no identification and huge wads of cash, and, wouldn’t you know it, in a coma. She is assigned to “special” him, or care for only him on her eight-hour shift, and she comes to think more about him than she should about a patient, though she knows nothing about him: “When he did come out of his concussion, he would probably turn out to be a ‘dese and dose’ character.”

He doesn’t; it turns out he is Chris Thorsen, the son of the owner of the shipping line, a very wealthy young man. Dr. Terry, a neurosurgeon by trade, wants to perform a new operation he’s perfecting, but Chris declines. Instead, Chris’s father offers up an old sailor, knocked on the head and never the same since, and if Dr. Terry cures him, Captain Thorsen will fund a new hospital for Dr. Terry. The operation is successful, of course, and Dr. Terry asks Dora to come work for him in the new hospital when it is up and running.

Dr. Terry’s interest, however mild it may be, is noticed by Nurse Vera Maynard, who is desperately in love with the doctor, and in petty revenge she takes it upon herself to spread malicious gossip about Dora. One of the lies she propagates is to tell Chris that Dora is in love with Dr. Terry. Chris asks Dora out, but she can’t go—Dr. Terry has asked her to go with him to the Founder’s Day Dance, because, as he explained when he asked her, “One must show up there for a while, at least, and it’s better to go with someone. I can’t stay long, but if you go with me, it will be a sort of—protection.” What a romantic fool. Chris tells Dora he’s heard she’s in love with Dr. Terry, but before she can explain, the Captain plows in and starts insulting everyone by handing out crisp $100 bills, and Dora runs off. Chris is discharged, and Dora tries to get on with her life.

Thankfully, Dr. Terry has ordered Dora to take advanced coursework at Columbia three nights a week, so that keeps her mind off Chris. She doesn’t have many friends, not really even her roommate. Liza is a wealthy young woman with a PhD in Greek and Latin that she doesn’t want anyone to know about who endlessly dates a stream of eligible young men, interested in none of them. “I don’t want to marry anyone,” she tells Dora. “It isn’t George that I dislike. I wish I did. It’s matrimony. The word has an ominous sound. It means the giving up of all freedom. It can’t be helped. It’s just the way things are. If you marry, you have to live in the mental, social, and financial milieu of your husband. You’re classified. So far, I’ve been able to live without belonging to any class—as free as one can be in this world.”

And so the book floats gently along, through Dora’s daily struggles in the hospital and at home, until it drifts into its easily foretold conclusion. But that doesn’t mean there aren’t a few surprises along the way—what happens to Liza, for example, and the Founder’s Day Dance, when Dora looks so ravishing in a silver gown and “properly absurd” $23 slippers, doesn’t turn out at all like the big dances in VNRNs usually do, but much more honestly. I especially liked the treatment of Dr. Terry, who begins the book as an awesome hero on a pedestal and is gradually deflated, chapter by chapter, until we see him as the inconsiderate, selfish pedant that he actually is. I actually wonder if Ms. Judson hasn’t deliberately subverted the usual custom of awarding the VNRN heroine to the deified doctor.

The writing is sophisticated, with references to Joyce Kilmer and his poem “Trees,” and the passage in which Dr. Terry offers Dora a job is “almost like a proposal out of Jane Austen,” when he begins, “This may be a little premature—you probably haven’t noticed that I’m interested in you and of course it will have to be some time in the future—” Dora is well-educated enough to spot the similarity: “For a moment she had been preparing a speech in which to tell him that she ‘esteemed’ him but could not love him.” The book is also witty and humorous, with a decent chuckle on practically every other page; my list of Best Quotes, above, is edited down to about half its original length, yet still longer than any other book I’ve reviewed. In short, City Nurse is an elegant and intelligent book, gentle in the tradition of earlier VNRNs (e.g. “K,” District Nurse, Graduate Nurse), and not to be missed.
Posted by Susannah at 4:19 PM