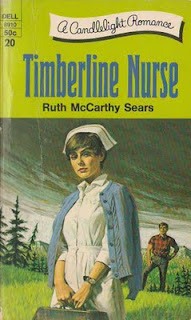 Crystal Garnette loved the beautiful, pine-covered mountains where she had grown up. But when her romance with wealthy Jeffrey Varian ended in heartbreak, Crystal fled to the city to forget. She succeeded, working at busy Rochester-Main Hospital—until her father’s death brought her back to Timber Town. Crystal vowed she would quickly leave. But she could not resist when old Doctor Curtis begged her to stay on at the understaffed mountain hospital. Then, in the midst of her greatest challenge as a nurse, she was faced with the hardest decision of her young life. How could she choose between two very different men—one a rough lumberman, the other a handsome doctor—who said they loved her? In this place where she already had made one painful mistake, dare she risk her heart again?

BEST QUOTES:
“You use much better grammar than the other people up here.”

“Sam says when two wimmin can’t seem t’ git along you can jus’ bet there’s a man mixed up in it somewheres.”

“Hill-country morals, darling, are so dreary!”

“No man in his right mind would let his girl see him in a shortie nightgown!”

“She longed to pour out the full strength of her womanhood on him.”

“I don’t know much about underwear and that stuff.”

“How you could hate Case a little when he forgot you to go about his mysterious man affairs.”

REVIEW:
Crystal Garnette is a nurse who has returned home to her mountainous hometown in the Sierras of California for her father’s funeral, but she cannot leave fast enough. When the book opens she’s all packed up and waiting for her ride to the train station—but then four women in the hospital decide to give birth at once and she is prevailed upon to stay and help out just one more day. Before you know it, Crystal has moved into a little house and appears ready to stay on indefinitely.

But she hates the towntownsfolk because they think she’s trash, stemming back to an incident when she was 16. (Now she’s either 22, as on page 19, or 24, as on page 153.) She had gone for a drive up in the mountains with young logger Clark Casey, aka “Big Case,” and when he made a pass at her and she tried to escape in his jeep, she drove the car off a cliff. They were forced to walk back into town, arriving there after midnight and landing smack in the middle of a search party about to set out looking for her. When she asked Case to explain where they’d been, he just said, “Explain what? That was no accident, sweetheart!” and stomped off. I’m hard-pressed to find anything even minimally scandalous in this misadventure—she’s clearly a wreck, with “torn clothes, the scratches on her arms and legs, the dirt caking her from head to foot,” and the wrecked jeep had been found earlier—but even now, six or eight years later, the villagers still scorn her; when she walks downtown, “two women, fat-hipped and heavy-busted, lifted their chins in a direct snub.”

Her reputation wasn’t the only ruin that Case’s refusal to clear her name created. Her then-boyfriend, summer resident Jeff Varian, the son of the man who owns all the timberland surrounding the town, dumped her following the incident. In her heartbreak she followed him to Rochester, New York, where Jeff’s family lives, to go to nursing school and occasionally call his house and hang up when the butler answered. Eventually, though, she ran into him, and the fickle cad took up right where he left off, until he used his father’s disapproval of her to leverage a trip to Europe: “I told him that unless he let me go to Paris I intended to marry you! … Isn’t that rich, darling?” So off he went, while Crystal furnished “their” apartment, waiting for his return and their marriage—but when he came back, he had (surprise!) a British wife in tow.

Crystal still blames Case for the wreck of her relationship with Jeff, although the fellow had displayed plenty of shallow tendencies all along. Case is big, arrogant, violent, and sneering, a complete boor. But he’s not the only flame in town; there’s Dr. Rich Lane, who dates Crystal briefly until he reveals that’s he’s really in love with the town’s wild half-breed Indian woman, Tondelaya. Then there’s a big dance, when Case asks Crystal to polka—and then, four pages later, “Why, I love Case! she thought wondrously.” What?!? Are they kidding? To make the absurdity complete, three paragraphs after that, Jeff turns up again, sporting a phony little British accent, telling her that his now-ex-wife has given his parents a blue-blooded grandson so he’s free to marry her at last. What a romantic! Case stomps off, and Crystal’s all heartbroken because “Case had wiped her kiss off his lips!” With this, my disgust with Timberline Nurse was complete.

Nauseating prose (e.g. “If she moved to serve him in any way, it would only affront his virility”), plot twists that defy logic, an Indian character drawn in a stereotypically bigoted fashion (“there’s buried treasure in that wild little heart of hers … She just doesn’t feel equipped to cope with the so-called civilization we try to inflict on her”), and a romantic interest who we’ve been set up to despise for the first 100 pages of the book did not endear this book to me. The best thing about it is the cover, which is truly spectacular. It is uncredited in the book, though it has the signature “Miller” in the corner. After a few hours of research, I’ve come to think that it was done by Chuck Miller, who apparently worked for Playboy, based almost entirely on its uncanny similarity to another painting of his, which appeared on the cover of the March 1962 issue, just three years before this book. So while you should spend some time with the cover, just don’t open it.
Posted by Susannah at 9:21 AM