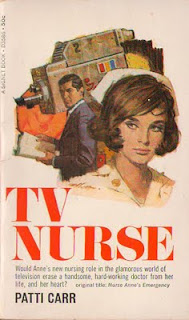 At $300 a week no job could be all bad. Anne Osgood’s new position as medical consultant to Arthur Howard’s projected TV special on Buttrick Hospital was a far cry from scrubbing in with Dr. Lee Vaughan on Surgery 1. She was no longer the dedicated nurse working with the doctor she loved. The thrill was gone. Lee’s own fierce ambition had brought about Anne’s disillusionment—which led her straight to Arthur, who offered all that money could buy. Was it enough to sway an uncertain heart?

BEST QUOTES:
“I do hope to do something about both the Miss and the Harlowe, of course. Meanwhile, call me Didi.”

“ ‘Take a pill,’ Arthur advised Mr. Grapnis. ‘I have some excellent ones at home. I’ll send you a few by messenger in the morning.’ ”

“She insisted he sit at the head of the table so they could all have a fair opportunity to rejoice in the presence of a male.”

“ ‘Little nurse,’ Didi said, ‘your technique as a woman is all wrong. I may know very little about anatomy, but I do know a great deal about strategy. You must be cornered, little nurse; your defenses must be stormed; your stern resistance must be overwhelmed.”

“I always feel sorry for intense people who think that all the present moment is good for is to serve as a springboard into tomorrow. Yesterday, today was tomorrow. Why’s tomorrow so much more important than today?”

“The place of a woman, by golly, was beside her hero, whether he liked it or not!”

“ ‘I always marvel,’ Arthur said, ‘that people consider clothes and good grooming unimportant. … I dare say only the poor can afford the luxury of not caring how they look.’ ”

REVIEW:
Nurse Anne Osgood is the “roust” nurse of the surgical floor of Buttrick Hospital in Hardin City, a fictitious berg apparently in Southern California. (I’ve never heard of a roust nurse; when I googled the term, almost all the references were descriptions of this very book.) She seems to be a supervisor of sorts, managing the scrub nurses and the equipment needed for the various surgeries. But when the book opens, one of the surgeons, Dr. Lee Vaughan, has been making complaints about her. These charges are a significant black mark on Anne’s record. Of course, they’re completely unjustified: “I think if you’ll check my record, you’ll find that I’ve never before questioned any doctor’s decision on anything. I don’t have to be told that my knowledge isn’t equal to a doctor’s knowledge, or even that I lack the brain power of a doctor. But this is unfair,” she tells the chief surgeon, Dr. Peake.

The whole issue is complicated by the fact that Anne has been dating Lee. “Was this harsh-faced, harsh-voiced fellow actually the fellow who’d walked her along a certain beach last week and spouted the customary nonsense under the quarter-moon?” It seems now he wants to drive her out of surgery because she commented in her usual report that his unorthodox surgical methods require more work from the support staff, which got him in trouble with Dr. Peake. Then Dr. Peake has an insulin reaction in front of Anne—apparently it’s a well-guarded secret that he’s a diabetic—and after she calls for help and the word of his condition comes out, he is instantly retired to a farm in the country. Now his job is open—and Lee is hoping to step into it. Then he’s trying to make up with Anne: He tells her that Dr. Peake was afraid that Anne would discover that he was a diabetic and turn him in, and he asked Lee to complain about her to get her out of surgery. The plot thickens when she visits Dr. Peake, and he calls her a liar hoping to further Lee’s career. What’s the real story behind the complaints?

We’ll never find out. Anne forces Lee to retract the complaints and leaves the surgical department to work with a television production team filming a show about the hospital. Meanwhile, the remaining staff in surgery becomes convinced that Anne has been needlessly persecuted and quits, leaving the department in tatters. Lee continues to be rude to Anne, but now he’s childish, too, pouting about how he’s wrecked his own career, since the hospital administration makes it clear that with the surgery department falling apart, they’re not about to promote him. None of this seems to make any impact on Anne, and out of the blue she tells Didi, the woman she works with on the TV show, “I hope to marry Dr. Lee Vaughan.” This came as unpleasant news to me, and I kept hoping that some more suitable prospect would pop up in the second half of the book, but no such luck. She persists in chasing the big jerk, much to the chagrin of her Didi, who tells her, “I don’t know why you bother to humiliate yourself for this fellow. Girls are supposed to marry men; not crybabies.”

It’s just never going to work when the romantic interest is set up as an ass and then awarded the heroine at the end of the book. We keep hoping she’ll dump him, and even though she tells him—twice—“don’t call me, I’ll call you,” she always picks up the phone. The writing is often stilted and phony, such as when Anne tells Lee goodbye, yet again: “So hail and farewell, and all that. Or as they sing in one of those Gilbert and Sullivan operettas, there’s lots of good fish in the sea.” The television aspect of the book is really peripheral to the story, for all its play in the title. And the bizarre machinations to get Anne kicked out of surgery are, in the end, pointless to the story, for all the time we spend wrangling with them. If you can’t bring yourself to care about a book, you just shouldn’t read it.
Posted by Susannah at 2:50 PM