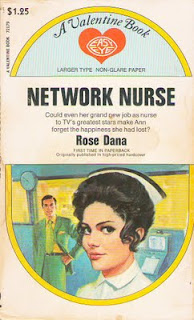 If she’d intended to shock young Dr. Burt Lee, Ann Haley couldn’t have managed better. She was leaving Midtown General, leaving him, for an exciting nursing job at the Amalgamated Broadcasting Co. But only Ann knew the pain of leaving the man she loved. Even in the hard, cruel but always fascinating world of TV, even under the pressure of famous stars’ demands—for her understanding as well as her care—she could not forget Burt. She knew why he wouldn’t marry her; couldn’t their problem be solved? Then an entirely new and glamorous TV career unfolded for Ann, one that few girls would refuse. But could Ann accept it—if it meant losing Burt forever?

BEST QUOTES:
“The personal wireless outfit he always carried with him would give off its warning beep, and he would at once get in touch with them from whatever part of the hospital he might be in. The quick communication between members of the staff was one of the ways electronics was helping in their fight to save lives.”

“One likes to dress bravely these days. It’s the in thing. I’m sure you had to brace yourself before you made up your mind to wear that daring mini-skirt.”

REVIEW:
Ann Haley is working at a Manhattan hospital, uptown on Park Avenue (she lives on E. 64th Street, “not too far from the river”). She’s tumbled for Dr. Burt Lee, who is 39 and has a 12-year-old daughter, Gail—his first wife is now deceased. But Gail refuses to meet Ann, and Burt is too spineless to prevent Gail from interfering in his private life. So Ann and Burt are drifting along, waiting for the day Gail changes her mind and Ann and Burt can get married. Until Ann gets tired of this situation and accepts a job offer to work for a television company as staff nurse.

Burt is entirely against this idea, because “that wouldn’t be real nursing.” They both also take the job switch as a sort of breakup, as if Ann leaving the hospital is the same as her leaving him. She sees less of him, of course, but they still date, so I wasn’t clear what had really changed between them. But she does see other men. At work she meets executive Wade Nelson, who takes her to see Ethel Merman in “Hello, Dolly.” She likes him a lot—“Wade was always prompt ... and when she went out to join him, he noticed her dress at once,” unlike some other young men we know. So she mulls over whether she ought to marry Wade even though she doesn’t love him. Apparently remaining single is just not an option.

On the job at the network, Ann is “astounded at the number of diabetics and allergy victims on the staff. She had not imagined these diseases to be so common.” (This left me scratching my head, wondering if she spent her time at the hospital in the broom closet.) She treats young secretaries who have fainted from taking “reducing pills” and an executive who has a “heart seizure.” One young man in the publicity department is ill with “viral jaundice,” and Ann is very concerned that he may have infected the entire department by coming to work that morning. He’s more dangerous than a leper, she tells him—“Leprosy is only mildly contagious.” Viral jaundice is actually hepatitis A, which is transmitted via the fecal-oral route, so there must be some strange doings down there in publicity.

Outside of dating and slapping splints on crewmembers who fall off the scaffolding, Ann is embroiled in office politics when the network star Dr. Ruth Winters connives to oust Pat Harrigan, a long-time variety show host, because Dr. Ruth wants his time slot. Ann befriends Pat because he has epilepsy and is scared witless that Dr. Ruth will find out, because “it could finish my career if it got out,” he tells Ann. You’d think he might want to take off that medic alert necklace.

The book runs on autopilot until exactly 30 pages from the end, when the author must have realized he had just two chapters left to tidy everything up and shifts into overdrive. Suddenly we learn that Ann has decided, out of the blue and for no discernable reason, to leave her job. Dr. Ruth’s contract negotiations don’t go well and she leaves the network, and Ann is offered a TV show called—wait for it—“Network Nurse,” where she answers questions from viewers and interviews doctors. Burt tells Ann, “You’ll be making a major error if you go through with it” because the show has “cheap appeal,” and stops calling. Then, four weeks after the show has aired, he phones to say, “It’s not so bad after all,” demonstrating what a nice guy he is. This lifts Ann out of a depression—though the show has been a complete hit (surprise, surprise), she’s unable to enjoy it because of Bert’s censure. So now all we have to do is get Gail to approve of Ann, and we can break out the champagne.

This book has little spark to it, and it feels like author Dan Ross is just going through the motions. The writing is not terrible, though the medicine in it is completely bogus. If you’re going to write a nurse novel, can’t you spend at least an hour doing some basic research on the diseases you’re going to expose the heroine to? Dan also returns to an odd device we first encountered in Nurse in Nassau (which bears more than a few other resemblances to this book); he refers to one of the secretaries as “the dark woman” 14 different times throughout the book. On the plus side, it is rare for a nurse novel to give us a romantic interest with a child, and the author goes further by also introducing us to “a smart young Negro doctor” with “intelligent eyes” who briefly crosses paths with Ann in the hospital. Dan also gives us a television star who became an alcoholic, but then joined AA and sobered up and is trying to make a comeback. Her show flops and she kills herself, but you can’t win them all. And neither can Dan; this book, no winner itself, is not worth your time.
Posted by Susannah at 11:09 AM