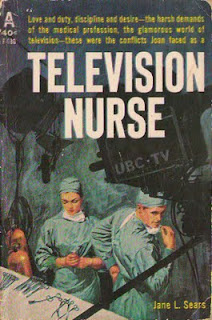 Just before Doctor Duncan Manley left for Europe he had shared a dream with Nurse Joan Shipley: when he returned he would set up a practice somewhere far from the phony glamour and the phonier symptoms of the Hollywood Hypochondriac Set. His eyes had told Joan that she was included in this dream. Now Duncan was back, but not where he belonged: in an operating room, with Joan by his side. Incredible but true, Duncan had turned television actor in a series called THE AMERICAN DOCTOR. Why? Surely the owner of Sunset Hospital, who was also the series’ chief backer, could not have compelled him to do it. Joan’s conscription as technical advisor was another story. She couldn’t risk dismissal from the hospital with the word UNCOOPERATIVE scribbled across her record. But Duncan was a free agent. Or was he? What had happened in Europe to change him so completely, and to destroy Joan’s most cherished hopes?

BEST QUOTES:
“There is no pseudo sophisticate propped atop a hospital bedpan.”

“She reminded him of a typical California orange: large, lush and mouthwatering, but hollow inside.”

“He had that Ivy League tastefulness you seldom saw in native Californians.”

“Gathering up her bottles, her lotions, her creams and polishes, her cigarettes, beach towel, robe, sandals, straw handbag, transistor radio, and three white Poodles that had been lolling in the shade, Lace made a stiff-backed exit.”

“The love he felt now was an intelligent, mature love. An all-encompassing love which, while it delighted and amazed him, also filled him with an agony even seven scotches didn’t dull.”

“How he envied that bastard smoking over there under the grid—that Doctor Duncan Manley with his hound-dog eyes and jutting chin which dames always figured denoted some kind of stalwart strength rather than an excess of bone formation.”

REVIEW:
Joan Shipley is a young nurse working at Sunset Hospital in Bel Air, California. She’s been waiting for Dr. Duncan Manley to return from Europe, where he’s been studying abdominal surgery for the past year. They’d never even dated, no promises were made before he left, but the two were just so, well, simpatico—“ideas and opinions meshing so perfectly they had often glanced at each other in quick surprise. ‘I was just going to say that!’ or, ‘That’s exactly the way I feel!’ ”—that, now that he’s back, Joan can’t believe a marriage offering isn’t in the works.

Until she hears that, instead of starting up a practice in a “small California town, still simple and untouched,” where she can work alongside him, “their ideals and dreams holding them firm and sure in a land of shaky foundations and artificial emotions,” the doctor has taken a starring role in a pilot for a television show called AMERICAN DOCTOR (the all-capital letters is, unfortunately, how the name is shouted at us through the entire book). Instantly, she is transformed into a seething, frigid little Popsicle. When she meets Duncan in the elevator and snubs him, he tells her that he has to do the show: “I … I can’t explain it, Joan.” Of course, we savvy VNRN readers instantly understand that some form of blackmail is at play here, having seen this exact same plot twist, oh, dozens of times before. But does Joan clue in? We savvy VNRN readers instantly understand that she will not! For the rest of the book, we listen to Joan’s constant and endless internal rants against Duncan: “Oh, what had happened to him? How could he come here day after day and waste time mouthing words from a television script when people needed his skills and services at the hospital?”

But we must keep the sparring couple in close proximity, so at the same time as she learns of Duncan’s role in the TV show, Joan is informed that the hospital’s owner, whom she cannot refuse for fear of losing her job, is insisting that she serve as technical advisor to the starlet who has the role of nurse. Claudine Christopher is staging a comeback after her seven-year-old child star son, Benjy, died. Claudine has some sort of hold over Duncan, who drops his petals and folds his tent every time she insists he do this or that for her. Joan briefly wonders about this, but it never occurs to her to ask Duncan about it. No wonder he chases her with such determination.

Another of Joan’s flaws is that, for all she now despises Duncan for not ministering to the “simple people in California with complicated stomach aches,” she herself is a bit of a snob. She’s grown up with money—her mother is a famous, and shallow, interior designer to the stars. She went to Stanford for her undergrad degree (apparently she couldn’t get into Berkeley). “She had a style, a sleek, smart class,” and her clothes are always so much more sophisticated than the gaudy Hollywood people around her. She is wooed by Ad Cartwright, the show’s totally fabulous and phony director, who “talked in italics,” air-kisses everyone, and says things like, “I’ll be miserable if you don’t come to cocktails Thursday!” When he tries to impress Joan by taking her to the best restaurant in town, she snarkily mentions that she is personally acquainted with the chef and his repertoire: “I really prefer gigot d’agneau to the gelantine of duck in port they serve here, but then Alexandre can prepare anything from the entire French haute cuisine, don’t you agree?”

The writing is clever and amusing, and some of the minor characters are very enjoyable—thankfully we do get to spend a fair amount of time with Ad Cartwright, both from Joan’s perspective and also inside his head as well. But Joan is not an especially endearing heroine. Her relentless, over-the-top fury at Duncan comes across as stupid and irritating, especially since we are treated to generous helpings of it in every chapter, and as it is more than obvious that Claudine has forced Duncan to do the show. I don’t really mind an overused plot device—i.e. the misunderstanding that one party cannot explain to the other keeps the star-crossed lovers apart—but it really ought to make sense. Why is Joan’s anger so unrelenting and all-possessing? Why are Duncan’s actions so totally unforgiveable? I could not understand Joan’s feelings, so I couldn’t sympathize with her, or even like her, which pretty much undoes the main foundation of a VNRN. While the writing makes this book worthwhile, I still left it feeling unsatisfied, because I felt that, after everything she put Duncan through with her unjustified rage, Joan didn’t really deserve her inevitable happy ending.
Posted by Susannah at 11:20 AM