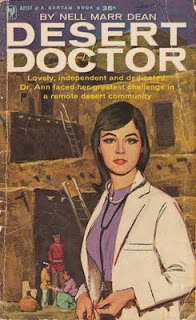 “We figure women should stay home.” That’s what they told Dr. Ann Logan, beautiful and only twenty-five, when she dared set up practice in the wild desert country of the Southwest. But the need for medical care in this desolate area was a challenge Ann could not ignore. When she discovered that more than prejudice against her sex was behind the threats she received, she still performed her duties as she saw them. Then a criminal struck, leaving Ann unconscious on a lonely mountain road. Through her long recovery, Ann battled with the question: “Was her dedication to her profession worth the risk of her life?”

BEST QUOTES:
“I would much rather have you operate on my appendix than on my office ledger.”

“Being aware of a man’s emotional apparatus, she was careful to keep her physical weariness to herself. Men always enjoyed the company of a lively, happy woman; not a droopy, harassed one.”

“You mean, Doctor, you’re going to keep him in your nice house all night? A foreigner—and all lousy with fleas!”

“Don’t think a woman doctor isn’t human like all other people. Don’t think she’s exempt from the need of falling in love and having a husband and being protected like every other woman in the world.”

“Never, she went on thinking as they drove along in silence, must she let her career become too all-consuming. She must learn to divide her energies between her work and Tim, never letting her work steal too much of her vitality and gaiety so that there was none left for Tim. And her skill at being a wife would be tested to its ultimate when they had children and her time must be divided to include them.”

“Doctor—if I do have the hysterectomy, will I still be nervous and want to snap at John for no reason at all?”

REVIEW:
Dr. Ann Logan has bought the practice of the retiring doctor in Pueblo Mesa, New Mexico, a town of 5,000 in which half the population is Indians and Spanish-speaking people and the other half white. There’s no other doctor in town, and the nearest hospital is 70 miles away, but that doesn’t stop the townspeople, who “haven’t become used to women doctors,” from giving Ann the cold shoulder. Well, all except the drug addict who attempts to carjack her for the morphine she carries in her bag. And Tim Butler, who “saves” her after she flashes an SOS with her headlights, by simply opening the car door—gosh, if only she’d thought of that! He takes to going around with her, because “a woman’s really not safe in this town—with crazy Mexicans running loose.”

Ann is, of course, a woman doctor, and this fact is thrown in the reader’s face on every other page, with reminders of what a terrible obstacle this is for her, as if she had warts on her nose or something. Curiously, the prejudice that Ann is so conscious of does not help her see the hypocrisy of her attitudes toward the minority residents. “Would these Indians never learn to follow her advice?” she grumps when one of her patients with strep throat goes swimming. She’s “thoroughly exasperated with her thoughtless, self-willed patients,” who “often indulged in the wild extravagance of owning several pieces of high-price electrical equipment” like washing machines and automobiles, items she herself could not imagine living without. Her boyfriend’s not much better; he tells her that although “a lot of these Indians get checks for two or three thousand dollars every few months,” they are “nothing but moochers” who pay Ann in beans and corn.

Ann has an idea to start a free clinic for well babies so she can get to know the townspeople and, she hopes, gain them as patients, but the cranky chair of the city council turns down her request to use space in the city hall. The owners of the local mine dismiss her suggestion that they open a separate clinic because they don’t want to pay for “socialized medicine” for their employees, even though it’s a dangerous job with lots of injuries. She nags the townspeople that they ought to use the funds they have allocated to create a museum to build a hospital instead, and is shot down. But she’s got enough patients to keep her head above water—until a doctor with a penis comes to town and is promptly granted use of the town hall to give immunizations to the town’s children, and the gas company opens up a clinic and puts him in charge of it. Ann is furious that he has “stolen” her idea of a clinic, and scorns him because he drinks too many martinis. The book winds itself up after this with another (more successful) appearance from the drug addict, everyone finally rallies around Ann, and ground is broken on the hospital that the reader can easily see has been in the works from early in the story—three guesses as to what it’s named.

Numerous little plot threads come and go, a good deal of them nowhere, like a woman who has to have her foot amputated when it’s caught in a trap on a night when Ann has gone out on a date instead of waiting by the phone lest someone need her. Or Dr. Jones’ drinking, or Ann’s strictly platonic relationship with the flirtatious Dr. Lacy at the hospital, or the traveling couple who have rented her their house in their abscence telling some people they are coming home but not Ann. In another book, these things would portend something, or amount to more they do. In this one, it just feels like we are hearing about every element of Ann’s life, no matter how inconsequential, and it’s just confusing to wonder which details are important. The only thing you never wonder about is her relationship with Tim, and we’re subjected to a little too much spooning and swooning from the pair to make you at all enthusiastic about their eventual and totally inevitable engagement. The ending suddenly drops off a cliff, like you’re expecting floor when there’s really one more step to go. It’s not a painful read, but the book has a fair number of little flaws that make it not worth the effort.
Posted by Susannah at 4:12 PM