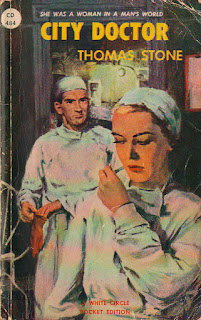 Sometimes working with Philip was more than Jane could bear. She admired him as a doctor; she loved him as a man. But Philip preferred women like Cynthia—Sin for short. So Jane worked with him day after day, while his nights belonged to Cynthia, until that night when Jane found herself in desperate trouble, trouble that would smear her over the front page and wreck her career. No one could help but Philip, and to help her she must make him see her as a woman. … Here is a dramatic, behind-the-scenes story of the medical profession—the private lives of some of those men and women in white.
GRADE: A
BEST QUOTES:
“His patients practically never had the bad manners to die on him.”
“I play no favorites,” Phil sometimes said, when a woman asked him if he preferred blondes, or what. “All I demand of my gals is that they know how to hold their liquor, mean that come-hither look in their eye, and that I’m the one man in their life, as long as I’m holding them in my arms.”
“San Francisco is my first and truest love. But the old city is really quite a trollop, you know. She was conceived in abandoned sin. The miners came in Forty-Nine, the gals in Fifty-One. And when you think of the lovers she’s had since—show me a two-fisted, hard-drinking man who hasn’t loved San Francisco—she’s really quite the scarlet hussy. And still going strong, after nearly a hundred years.”
“Mrs. Lambert does so enjoy being ‘examined’ by you.”

Email ThisBlogThis!Share to TwitterShare to FacebookShare to Pinterest
Labels: San Francisco, theme, theme - standing up for her beliefs, theme - woman vs professional