His Wife the Doctor 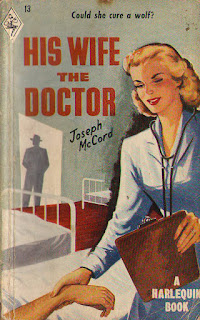 Serenity Dale, M.D., was firmly established in the city as a Doctor, with an enviable reputation for her skill and hard work. Married to Maury Parrish, a thus far unsuccessful novelist, Serenity was trying hard to prove her theory that marriage and medicine could be happily and profitably combined. All might have gone well had she not accepted, against her own wishes, a position as head of a private hospital, for it was then that her difficulties really began. Before she realized what was happening, Maury was seeking inspiration elsewhere, and she became involved in professional troubles of her own. Fortunately Serenity was a skillful enough doctor and a good enough wife to make her own prescription work, after she was shocked into a realization of the problem with which she was confronted.

“The older I grow the less certain I am just what makes for a successful life.”
“The woman in her transcended the physician momentarily, as Serenity thought to herself, ‘She does something to that hair.’ ”

Email ThisBlogThis!Share to TwitterShare to FacebookShare to Pinterest
Labels: theme - failure to communicate