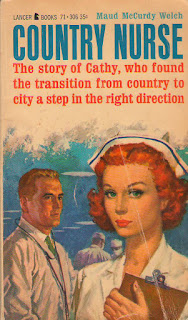 The grapevine in the hospital said all the nurses had a crush on young Dr. David Lorimer, but that he only returned the compliment for one, Cathy Linton. But did he? Though he had been her childhood playmate in Springvale, things were different now … and there was Patrice McDaniel, glamorous, a little wild, but sure of herself where David was concerned. And if David married her, one day he would inherit the directorship of the hospital from his father-in-law. What could Cathy offer him? It seemed out of the question. Yet that lovely summer day by the river when he had tried to kiss her … Meanwhile, work was exciting and far more important—there were other lives and hopes to think about. Roommate Jean Adair and her little Barby … Dear Aunt Dorie … Aunt Margaret, too, who wasn’t so dear … and who was the mysterious stranger who had been searching for Cathy?

﻿﻿﻿﻿﻿﻿
GRADE: C+
BEST QUOTES:
“Almost any kind of marriage is better than none. I know, because I’m an old maid. You get married, honey, and have a home and babies, so that your heart won’t be empty like mine.”
REVIEW:
﻿﻿When Nurse Cathy Linton’s father, the local country GP, dies suddenly, he leaves her less than nothing—mean old Aunt Margaret, who has more money than God, turns up to console Cathy with papers showing that her father owed Margaret $10,000, which she expects Cathy to repay. Margaret also tells her that she’s to start a new job at Barrett Memorial Hospital in Memphis, 70 miles from her country home, at noon that day. So she packs—“We must hurry, Cathy,” says Margaret’s sister Dorie, “Margaret has a luncheon engagement”—and off she goes, the country mouse to the big city.
She’s given a bungalow on the hospital grounds, which she shares with Nurse Jean Adair, who is never home, mysteriously, and it’s two weeks before they actually cross paths. Cathy is lonely, of course, but the saving grace for her is that Dr. Daniel Lorimer, her childhood friend, is also working at Barrett. She hasn’t seen him in ten years; he left town when he was 17 and she was 13. She hears a lot of gossip about him from the other nurses, such as, “He keeps his heart in deep freeze. Just has no time for women.” Well, maybe one woman—he takes Cathy home to Springvale for a day and, after a swim in the river, tries to kiss her, but she slaps him hard! Because after all, he’s engaged to Patrice McDaniel, the daughter of the hospital chief! Which she knows for a fact because everyone at the hospital says so!
Meanwhile, Aunt Dorie, who never married, is growing weary of living on Aunt Margaret’s largess and under her thumb. What she wouldn’t give to have a job as a baby nurse! And as fate would have it, we have a baby who needs nursing—Jean’s baby Barby, almost three, is being cared for by Jean’s grandmother, but Gramma ain’t as spry as she used to be and keeps forgetting to feed the baby. And where’s the father? Well, it seems he lost his job and then disappeared, but Jean knows that Johnny really loves her and will come back some day, so can’t bring herself to file for divorce. So Dorie moves in with Gramma and Barby, and now Jean and her family are happy and well-fed.

It turns out the hospital gossip mill has something to say about Cathy, too, that she is engaged to Dr. Bob Kendall, whom she’s dated a couple of times but has no especial fondness for. Though she is shocked to hear such outrageous lies spread about her, when te same grapevine declares that the announcement of David’s engagement to Patrice is also imminent, she is totally crushed by the news. Then one night David catches Cathy out walking on the hospital grounds and tells her that a new hospital is opening in Springvale, and he’s been offered the job as head of it. He’s going to take it, of course, and he wants Cathy to marry him and come home and work there with him. But she can’t marry him, because she owes so much money to Aunt Margaret: “I can’t marry a man and let him shoulder such a debt,” she tells Jean—not David, of course, who is left completely in the dark as to why she’s turning him down. So when she hears the next day at the hospital that Patrice is marrying David, the stupid girl “believed Patrice was the girl David really loved.” Argh!

Not to worry, though; before too long, all the loose ends are swiftly tied up. Jean’s husband comes back; Mildred, Jean’s new roommate, finds out that the woman she saw her boyfriend with was his mother, who is in town to meet Mildred in anticipation of the couple’s engagement; a mysterious man who has been looking for Cathy since the beginning of the book (and doing a really poor job of it) turns up with a letter from Cathy’s dead father, which turns out to be a contract of sale of an invention he’d been working on that will earn her, his sole heir, $46,000.78. Now she can marry David—“then she told herself not to be absurd. Everyone said that Patrice was back in the picture now. ﻿Nearly all of the gossips were betting they’d get married.” It takes good old Jean to tell David the truth, and to get him to come back for one more try at setting stupid Cathy Linton straight. I wasn’t completely overjoyed when he succeeded.

During most of the last half of this book, I had the distinct impression that I’d read this book before. When I checked on the other book of Ms. Welch’s that I’d read, Nurses Marry Doctors, that déjà vu feeling became clear: It, too, has the same misunderstanding between the heroine and her intended, who thinks she’s going to marry the other doctor she’s been casually dating; the same young nurse caring for a baby without a father (in the other book, the baby was named Betsy, not Barby); the same nurses living in bungalows on the hospital grounds where they spend a lot of time strolling; even down to the same pleasant light sweetness that pervades the book. It’s not a bad read, but it’s not really satisfying—Aunt Margaret never gets a comeuppance, Cathy’s stupidity remains intact and unchastised at the end. The only faint hope for Cathy’s redemption lies in the fact that in the end, when he asks her if she loves him—“You couldn’t possibly have let such a ridiculous thing as a debt come between us, if you had”—she essentially proposes to him, saying, “I love you very much, David. I—want to marry you if you still want me.” But like I said, it’s only a faint hope, and I can’t imagine that anyone as susceptible to hospital gossip and as unable to communicate with her beloved as Nurse Cathy Linton is going to remain happy for long.﻿﻿
Posted by Susannah at 12:29 PM