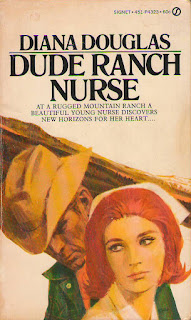 The bus toiled up the treacherous mountain road, carrying red-haired Nicole Lawson to her new job as nurse at the High Sierra Dude Ranch. High Sierra, where March men, her employers, wrangled bitterly among themselves. High Sierra, rimmed by craggy mountains where dangers lurked. High Sierra, where she soon would be the object of violent emotions: jealousy, anger, desire—and love…
GRADE: B-
BEST QUOTES:
“You’re even more attractive when you’re mad!”
“You’re pretty as a palomino.”
“Don’t tell me a girl who looks like you wants to work all the time?”

Email ThisBlogThis!Share to TwitterShare to FacebookShare to Pinterest
Labels: bear, sexual assault, theme - standing up for her beliefs, Wyoming