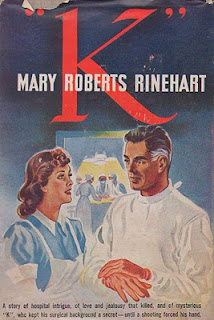 BEST QUOTES:
“As he came down the stairs, Dr. Ed, who had wiped his tiny knife with a bit of cotton,—he hated sterilizing it; it spoiled the edge,—thrust it hastily into his pocket. He had cut boils without boiling anything for a good many years, and no trouble.”

“Women are dangerous only when you think of them as toys.”

“We thought you were dead. There were all sorts of stories. When a year went by—the Titanic had gone down, and nobody knew but what you were on it—we gave up.”

“Across the Street, the Rosenfeld boy had stopped by Dr. Wilson’s car, and was eyeing it with the cool, appraising glance of the street boy whose sole knowledge of machinery has been acquired from the clothes-washer at home.”

REVIEW:
I was a bit surprised to find a copyright date of 1914, which makes this the oldest vintage nurse romance novel I’ve encountered to date—almost a hundred years old. Author Mary Roberts Rinehart actually trained as a nurse, and even married a doctor she’d met during that time, so she clearly knew what she was writing about. But she was primarily a mystery novelist of some renown: She created a character (The Bat) who was one of Bob Kane’s inspirations for Batman, invented the “had-I-but-known” school of mystery writing, was the source of the phrase “the butler did it,” and helped her children establish the publishing company Farrar & Rinehart. So it is an honor to include her book in the genre.

“K” does not disappoint. It is a lovely, gentle story that builds a community on the street where Sidney Page lives. Among the 20 characters you will come to know, there is Dr. Ed and his younger brother, the brilliant surgeon Max; young Joe Drummond, who fruitlessly courts Sidney; and Mrs. McKee’s boarding house, where you can get all your meals for $5 a week. Sidney, her widowed mother, and her aunt Harriet are a genteel yet poverty-stricken family who can only afford one maid. When Harriet decides she is going to move downtown and start an haute couture house, Sidney and her mother are forced to take in a boarder, K. Le Moyne.

It’s clear from the outset that K. is a pseudonym—duh!—and it is slightly annoying that he could not, even to the end of the story, be anointed with more than just an initial. But he is a genuinely likeable and pathetic character, tortured by a tragedy from his past, yet kind and generous to everyone on the Street. He helps get Mr. McKee, who has been “sent up,” placed in a workhouse, thereby earning the family sixty-five cents a day. “As this was exactly sixty-five cents a day more than he was worth to them free, Mrs. Rosenfeld voiced the pious hope that he be kept there forever.” Before long K. is in love with Sidney—which we find out in a sweetly understated way, when K. pulls a cursory note Sidney has left for him from his wallet to show Joe. “Only about the hospital—but Le Moyne had kept the note, treasured it! Joe was not subtle, not even clever; but he was a lover, and he knew the ways of love. The Pages’ roomer was in love with Sidney, whether he knew it or not.”

Joe Drummond is an ordinary boy with a doomed passion for the luminescent Sidney. “As different as smug, satisfied summer from visionary, palpitating spring, he was for her—but she was for all the world.” Sidney is not content to be a wife, however. She decides to go into nursing, though quite a few people on the Street think this is not appropriate: “There’s a good deal in life that a girl need not know—not, at least, until her husband tells her,” Dr. Ed says. In the hospital during her training, she is protected by Dr. Max, who stops by to beam down upon her the radiant glow of a star surgeon on a young nursing student. In return she falls madly in love with him. He is a playboy—or “as crooked as a dog’s hind leg,” as Joe says—with at least one other nurse on a string, but he is taken with Sidney’s freshness and proposes to her. But that’s on page 288, when we’re almost three-quarters through the book. There’s a lot of life, and lives, to be wandered through in the meantime.

Dr. Max eventually runs into K., and it turns out that Max knew K. when he was Dr. Edwardes, an even more brilliant surgeon in Berlin. Max is doing “the Edwardes procedure,” which has been done only a few times before, saving lives and earning himself fame and fortune. Max starts consulting with K on the sly, and “under K.’s direction, Max did marvels. … More than one man or woman who did not know of K.’s existence owed his life to him that fall.” Then there’s a near-fatal shooting, and K. is the only person who can save the patient. “K. was Dr. Edwardes!” Sidney discovers. “Dear K., with his steady eyes and his long surgeon’s fingers!” (Just what is it about surgeons’ hands that fascinates romance writers so?) Surely you can guess where the book is going from here, but you could say the same of Pride and Prejudice; the fun is in the getting there.

“K” is, like many early VNRNs, a book first, and a nurse novel only by happenstance. The characters and their situations are varied and interesting, and the book gently works through all of them, winding their stories together into a rewarding whole. Not everyone has a happy ending, and that makes the book even more gratifying and real. The writing is quiet but delightful, with occasional sparkles like this one: “Little girls in pig-tails, carrying freshly sharpened pencils, went primly toward the school, gathering, comet fashion, a tail of unwilling brothers as they went.” The picture it creates of a small community of intertwined lives in the early 1900s is charming and comfortable, and this book easily earns its place on the bookshelf.
Posted by Susannah at 12:08 PM