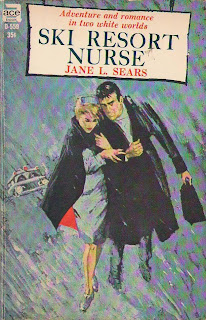 Nurse Quentin McCall had two great loves—skiing and nursing, and the Crystal Valley hospital seemed the ideal place to combine them. But lovely Quentin soon found herself tangled in a snowdrift of conflicting emotions. For two men occupied her thoughts and neither would believe Quentin to be what she was. To the wealthy widower Alex Kriloff, she was the past refound, the dead come alive. To Dr. Ken Johnson, who turned a cold shoulder to romance, Quentin was a disturbingly beautiful reality. Quentin asked herself, “If a mask was a necessity for love, was she willing to wear one?”

BEST QUOTES:
“I got TB bundling with a doll in Smitty’s sleigh!”

“Quentin couldn’t seem to stop Tillie from jamming those needles into her.”

“She wondered where he was and if he was still tortured.”

REVIEW:
Quentin is a fresh nursing school graduate who has decided to take a job at a hospital at a ski resort in the Sierra Nevadas. She’s been skiing her entire life, having grown up in New Hampshire, and this job will allow her to combine her two passions. Of course, she finds some new ones just minutes after walking through the hospital door. Dr. Ken Johnson instantly reveals himself as “a complete grump, disliking youth and fun.” He hates skiing and young nurses, who he believes come to his hospital to meet unattached millionaires who have broken a leg on the slopes. And he’s rude, sarcastic, and constantly angry, shouting at nurses and patients alike. So Quentin is instantly infatuated, “glad she had on the black knit stretch pants that flattered her long-legged, narrow-waisted figure.” She can’t stop thinking about the big jerk, though he gives her little encouragement—just one fleeting moment when, for once, he apologizes for his rudeness and says, “I wish…” before being called away to attend to a patient. Love does not take a great deal of fuel to start a bonfire in a vintage nurse romance novel.

There is, of course, another man. Alexander Kriloff is an insanely wealthy recluse who spots her schussing down the slopes one evening from his mountaintop aerie through binoculars and spends weeks uncharacteristically searching the pubs for her. His is a tragic story: He and his new bride had come to his house in the mountains for a skiing honeymoon, but she came down with appendicitis just as a blizzard set in, and there was no way to get to the hospital on the other side of the Donner Pass—and she died of a ruptured appendix in her husband’s arms two days after their wedding. He responded by building the hospital, where Quentin now works, in her honor. It’s quite a hospital, too, where waiters serve the patients bloody Marys, the cafeteria offers filet mignon, every window has a million-dollar view of the slopes, and the patients don’t have to leave until they want to. It costs plenty, of course, but most of the patients are wealthy jet-setters who don’t mind the bill.

Alexander meets her eventually—and then it’s a whirlwind romance. He has her over for dinner, fetched in the Rolls by his chauffeur, and gives her a tour of every room in the house—except one; gosh, I wonder what’s in there? He flies her to San Francisco for an evening of cocktails at the Top of the Mark and then dinner at Ernie’s. He sends her five dozen roses. But she has limits: When he tries to give her a gold clock with the alarm set for 8:00, the time of their date that night, she gently returns it. She quickly comes to feel a motherly affection for him that she calls love. “Only one thing disturbed her and that was his increasing possessiveness … demanding she spend every spare moment with him until at times she felt very nearly suffocated.” However, as soon as he proposes to her, “his complete need for her marked by a possessiveness that had troubled her previously, made her own heart respond and want to give.”

I could tell you more about the plot, but why bother? That’s not why you should read this book. The writing is entertaining, descriptive, and campy, everything I look for in a VNRN. The romance is amusingly over the top: “Her hands still caught firmly in his, Quentin slowly lifted her eyes, felt herself drowning in the depth of his brooding gaze.” The luxe settings help with both the appeal and the camp: “With a small sigh she turned in the seat, gazed at the back of Charles [sic] neat neck beneath his chauffeur’s cap, and let her fingers idly trail along the leopard skin upholstery. ‘My gosh!’ she whispered to herself. ‘Wait until Olive hears about this!’ ”

The biggest flaw this book has, apart from Quentin’s inexplicable attraction to Dr. Johnson, is the copy editing. Now, I know the people out there who care deeply about commas can be counted on one hand, but I am one of those very curmudgeons. Typos such as “grizzly detail” (they mean grisly) and “her body felt like it was being seered” (it should have been seared) can be shrugged off with a laugh, but the constant confusing of it’s with its was absolutely maddening. (The former means it is, as in it’s mine, while the second refers to something belonging to it, as in its color.) However, with such fabulous writing, a great cover, and another of Ace’s magnificent cover lines—“adventure and romance in two white worlds”—I can heartily recommend this book, it’s disrespect for punctuation notwithstanding.
Posted by Susannah at 9:55 AM