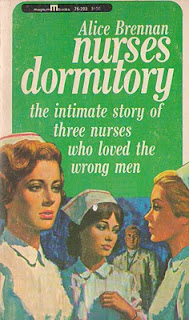 “Is it wrong to marry for money?” asked Nurse Miller. “Is it wrong to resent your mother because she is a glamorous movie star?” asked Nurse Gray. “Is it wrong to love the boy next door who thinks of you as a kid sister?” asked Nurse Leighton. Nurses Dormitory is an unusually warm story of the lives of three young nurses and the men they fall in love with. Told against the backdrop of the wards, corridors and operating rooms of a big city hospital, there is an authentic insight into the scene behind the scenes and every character is as real as a favorite friend.

BEST QUOTES:
“Gosh, Lita, with your looks and figure, why on earth did you ever want to become a nurse?”

“Work may be enough for a man. It isn’t enough for a woman. A woman needs a man to look after her; to hold her hand in the darkness; to be there! Without a man she’s not quite complete!”

“The three of us. We should write a book!”

“Wear kiss-proof lipstick, Veronica. There might be a bit of necking on the evening’s schedule.”

REVIEW:
When I picked up this book, I was concerned that it might not be a real vintage nurse romance novel. This is the first book I’ve read that details the lives of more than one heroine, and with the cover lines advertising that they love “the wrong men,” perhaps the requisite happy endings would escape the grasp of one or more of the ladies. Is Gone with the Wind not a romance because in the end Scarlett doesn’t have Rhett, just a stubborn determination to win him back? Well, I’ll think about that tomorrow.

Today I turn my attention to Lita Gray, whose mother is a movie star; Susie Miller, one of six children raised in a poor family who strives to find herself a wealthy man; and Veronica Leighton, whose crush from the age of 12, now-Dr. John Sernian, still sees her as the gangly pre-teen she once was. The advantage of having three heroines is that their stories are pretty well encapsulated in that one sentence. There are, of course, a few guys to add to the mix: Mark Brandel is a pediatric surgeon who is angry and short with the staff. His wife and three-year-old son were killed in a car accident five years ago, and he continues to beat himself up because he could not save them. He avenges their deaths by pulling out every stop in his attempts to save the lives of every child wheeled in through the doors of St. Jo’s Hospital. He seems charmed by Lita, who has also built a wall around herself as a defense against shallow people who can’t care for her: “She’d been so sick of useless, bored people lapping up excitement the way a cat laps up cream. Of no real importance to anyone except themselves. Concerned only with themselves. She’d craved a reason for being. An importance to her life. To her mind nursing had supplied that reason. It continued to supply it.”

For Susie we have Veronica’s brother, Doug, who comes to town and sweeps Susie off her money-grubbing feet. This is a big blow for her, and she spends a lot of time battling with herself and Doug about how awful it would be to be poor, even if you are happy, versus marrying for love. “If you’re left $100,000 or so, why, ask me to marry you again,” she tells Doug. “But until then, the answer is no … no … no!” And to think that you’re scarcely considered rich these days if you have a million dollars.

The main story centers around the hospital’s chief administrator, Larson Payne, who is intent on boosting hospital profits at the expense of the poor “ward” patients. Naturally, between his gruff manner and his propensity for giving his patients every possible medical treatment, Dr. Brandel quickly runs afoul of him. He has defenders on the hospital staff, including Dr. John Sernian, who go to bat for him, but Larson Payne retaliates by cutting medicine quotas for ward patients in half—which means that at mid-month there is no more oxygen, medicine, or blood products for those patients. Even if Dr. Brandel is gruff, you come to like and pity him, and he clearly has his heart in the right place when it comes to his patients. But you know something bad is going to happen, and all Dr. Brandel’s patients are children, so the build-up to the final gun battle at the corral felt real to me.

The writing is cute, though it does tend toward the mildly self-conscious. Sometimes this works and sometimes it doesn’t. For example, I give you this: “Night is the time of rest, when after a day’s work, you can stretch your weary, aching bones across your own bed, close your eyes and be alone.” Readers more cynical than I am might raise a brow, but for me it worked more than not. And while two of our ladies do come out engaged on the other side, one remains Scarlet-esque, waiting hopefully for her beau to come around. He’s expressed interest, though, so we know it’s just a matter of time. I was pleasantly surprised by this book, and I looked forward to coming back to it when I put it down at bedtime. Don’t be put off by the homely cover; give this book a chance.
Posted by Susannah at 8:19 PM