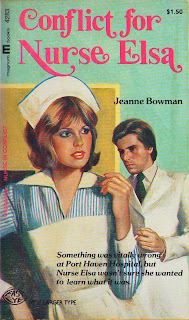 Nurse Elsa Hoyt signed on for a temporary stand-by assignment at Port Haven Hospital during her brief vacation in the Southwest. Port Haven had been the scene of many childhood memories, including those of handsome Albert Staffner and those of Dr. Paul Hoag, the stepfather who had broken her mother’s heart. When Elsa discovered that the very same Paul Hoag was the chief of staff of Port Haven, she was tempted to resign immediately. But her stepfather begged her to stay, explaining that he needed her, but not explaining why. Puzzled by his behavior and confronted with the hostility of now Dr. Albert Staffner, Elsa began to suspect a conspiracy against her stepfather. Faced with a decision whether to return to Chicago and to her fiancé or to stay in Port Haven, Elsa was frightened of what she might learn … and uncertain if she really wanted to. It took the chaos of a full-scale Texas hurricane to resolve the chaos in Elsa’s life.

BEST QUOTES:
“Once they were married, her metabolism could change and she blow up sky high.”

REVIEW:
If you are curious to know just exactly how low a publisher could stoop at the height of the nurse novel craze in an attempt to make a buck, speed directly to this book. You will, however, be sorry; this publisher ducked really, really low.

Elsa Hoyt is one of about 25 people you will meet in as many pages. But you’re stuck with her through the entire book. She has accompanied a patient from Chicago to Florida, and while there, a physician convinces her to answer the call for nurses from a short-handed hospital in Port Haven, Texas. She used to live there, and her ex-stepfather was a doctor at that same hospital. She doesn’t want to see Dr. Hoag, though he raised her from toddler age, because his marriage to her mother broke up for a reason unknown to her when she was in college. But surely everyone she ever knew from Port Haven would have left town by now, right?

Naturally, the first person she bumps into in the hallway after inking the contract is Dr. Paul Hastings Hoag. He says, “I know how you feel, Elsa, but don’t go away. We need you here. I need you—daughter.” She answers, and I am not kidding, “Atmosphere.” He responds by giving her the keys to his beach cottage, which she says she will rent from him, so no one will know their relationship. What? you may be asking yourself. I asked myself that very question many, many times. But there is no answer. This book is just that loopy.

She hasn’t seen the man since the divorce, but now she decides that she has to get to the bottom of why her mother left him. Then she is shocked to see a nurse in a miniskirt; she’s told that Mitzi can do anything she wants because she has an in at the hospital. Everyone lives in fear Mitzi will “explode and blow us all up,” another nurse tells Elsa, who immediately thinks, “Without there being powder, there could be no explosion. What was wrong here at Port Haven Hospital?” Huh? Well, never mind how she does it, but based on a cranky nurse in a miniskirt, Elsa figures out there’s a conspiracy against Dr. Hoag at the hospital. “What? Would she learn? Did she want to know?” Do we want to know? Not if we know what’s good for us.

Elsa naturally proves herself a godsend at the hospital, which is constantly receiving victims of carbon monoxide poisonings, hepatitis outbreaks, car wrecks, and house fires. For example, after the victims of a multi-car pileup are brought to the hospital, it falls to Elsa to tell the chick from Southern California that her husband, “Hominy the Hippy,” has died, because she’s the only one there who can speak jive: “Let’s say he had a date with Destiny. He didn’t really relate to this groovy world. Let’s say he left you a fine young son to see you through, then took off to another dimension.” The girl sighs, and Elsa leaves her sleeping peacefully. You’ve just got to know how to talk to these people.

For the bulk of the book, Elsa is either pacing the floors of her cottage asking herself what is going on at the hospital, reassembling victims of bloody accidents, or going on about how desperately she needs some rest. Well, to be fair, there are a few other bizarre events. Elsa finds a half-empty whisky bottle in the cupboard that wasn’t there yesterday and assumes someone has broken in to the cottage to read her mail, so she changes the locks and gets a post office box. If you’re snooping in someone’s house, why would you leave whisky in the cupboard? The young son of a neighbor eats diet pills containing digitalis left by an anonymous Port Haven doctor and is saved by Elsa and Dr. Hoag. Elsa later decides this was a plot to discredit Dr. Hoag because the pills weren’t approved by Port Haven Hospital. Is this woman psychic or a paranoid schizophrenic? It doesn’t pay to ask yourself these questions, but you just can’t help it.

Mitzi horns her way into the cottage and then throws a party, but on the night of the party a malevolent trinity in the form of Elsa’s fiancé, Elsa’s mother, and Hurricane Hannah arrive. The partygoers, hospital staff mostly, are called in to work, and it turns out that the Port Haven Hospital has had numerous architectural renovations that make it impervious to bad weather, while other local facilities do not hold up as well and are forced to close their doors and send their patients to PHH. This, it turns out, is what was at the root of the evil plot to drive out Dr. Hoag; he was more interested in improving the facilities than in driving up profits. A disagreement over his use of the hospital funds was what broke up the marriage between Elsa’s mother and Dr. Hoag, but now that Hurricane Hannah has proven him right, they walk off arm in arm. Elsa’s fiancé is bewitched by Mitzi, and she and all the other conspirators at the hospital are so unnerved by the tempest that they submit their resignations en masse. Elsa suddenly realizes she’s in love with one of the doctors, the one who broke into her house and cooked her liver on the grill, so now we can close the book. I don’t usually like to give away the endings, but this one was so stupid I just couldn’t help it.

The writing style is almost impressionistic in its vague way of expressing itself and in how each subsequent sentence seems to shoot off in a completely new and bizarre direction. In the first pages, there are two conversations occurring simultaneously, and it’s almost indeterminable who is talking, or what they are talking about. I had no idea what had happened in this first chapter until Elsa explained her arrival at PHH to one of the other nurses. But puzzlement is not an uncommon feeling brought on by this book; you will spend a lot of time early on, reading pages and paragraphs again and again with wrinkled brow, trying to figure out just what the heck is going on. Eventually, though, you get used to its flaky way and just float along, only occasionally rousing yourself to irritation over some especially egregious flaw. Don’t let apathy drag you down. Conflict for Nurse Elsa is a flaccid excuse for a VNRN, with very little story or common sense. Get angry, and get rid of this book.
Posted by Susannah at 8:25 PM