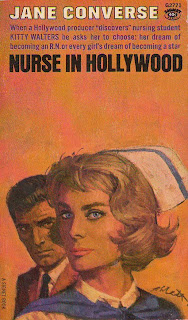 Her ash-blond hair. Her big brown eyes. Her pert figure. These were only frosting to her personality—a personality that was pure whistle bait. So what if Kitty Walters was a nursing student just three months short of graduating? So what if her idea of heaven was the symbol R.N. pinned on a starched white uniform? Phil Harlan wasn’t called “Boy Wonder” for nothing. He was dynamic, magnetic, charming, a glib Svengali whose record of convincing was 100 percent. Phil Harlan would have no trouble turning a dedicated would-be nurse into a determined Hollywood starlet. At least that’s what Phil Harlan thought …

REVIEW:
I was looking forward to reading this book because of the Richard Prince painting of the same name, done in 2004. He created a series of paintings based on the titles of vintage nurse romance novels, including Surfing Nurse, Dude Ranch Nurse, and Danger: Nurse at Work. Clearly I am not the only one drawn by such fantastic titles.

The actual story, however, is not as intriguing as the painting. Kitty Walters is three months shy of graduating from nursing school, dating resident Rex MacMillan. He says he loves her, but she thinks he is “caustic and superior … he lived medicine; he was surgery. … He thinks the world begins and ends with a hypodermic needle.” On study night in the nurse’s dorm, when they should be studying the names of the leg muscles, the students are watching Career Girl, U.S.A., a show that travels from town to town, “interviewing the outstanding local career girl,” with musical numbers as interludes. Something tells me this show would not knock Dancing with the Stars out of the ratings.

Dr. MacMillan is not a fan of the show, because he thinks the career girls are “picked for her measurements … The typical career girl’s apt to be a pleasantly plump, unglamorously efficient bank clerk from Podunk, Nebraska.” Well, not all of them. Kitty’s dorm-mates have sent her photo to the Career Girl producer, Phil Harlan, because he is looking for a real-life career girl to star in the movie version of his TV show. (It’s curious to ponder an era in which a working woman was such a novelty that she deserved her own film.) They’ve asked Kitty for an interview, and when she walks in the door on “those perfect Walters gams,” Phil takes one look at her and starts to gush: “You are it! You are she! She is her! We are made!”
When she tells Rex that Phil has offered her a two-year movie contract, he tells her she’s a fool to chuck her nursing career. “It was reminiscent of the time Kitty’s father had told her that she lacked the guts to finish a nursing course”—which was a large part of why she signed up in the first place. So she instantly decides to drop out of school and accept Phil’s offer. She is driven by “an insatiable restlessness, a desire for newness and excitement”; “though she knew her gain would probably never wipe out her loss, she also knew that pride would not let her turn back now.” This girl has a few issues she needs to work out.

So off she goes to Hollywood, where she finds a snazzy new apartment, Asian furniture, and a lot of new party dresses—and then she hangs around the house, waiting for Phil to call, for weeks. While she could have been finishing school. The film director, Damon Dyer, is a fat, has-been alcoholic with fabulous lines like, “Here, let me get you a weak ginger ale,” or, “Go embellish Mother Nature while I pop around the corner. I believe I noticed a haven for weary travelers as I drove up.” He is critical of Kitty, telling her, “To be driven is tragic but understandable. Merely to fall into a trap because you’re mildly intrigued …” But he is also kind, and takes her to a Christmas party at Phil’s house that the host neglected to invite her to.

Eventually Phil shows up with a script, and since Kitty has nothing else to do, she memorizes it from beginning to end. But on the first day of filming, which is in the desert 30 miles from LA, Phil fires the script writer and tosses out the script, writing a new one on the spot, which even Kitty can tell is wooden and hackneyed. So the actors spend a lot of time waiting around the set, contemplating Phil’s rapid crash, while Phil argues with Damon. Soon Damon walks off the set, and is promptly bitten by a rattlesnake. While Phil screams that someone should be cutting Damon’s leg and sucking out the venom (gross!), Kitty snaps at him to keep quiet, coolly packs the leg in ice, and keeps the patient calm en route to the hospital. After that, without Damon behind the camera, Phil is directing, too—and everyone can see that this production is going straight to video.

Kitty tries to quit, but Phil threatens her with a breach of contract suit. Then Rex shows up out of the blue on the set, and Kitty drums up an argument with him that even she can see is absurd. “She was succumbing to the same perversity that had made her defy her father when he had objected to her nursing career, the same mindless obstinacy that had prompted her to fight with Rex once before, discarding an R.N. degree three months before graduation for this debacle in the desert. She regretted her words in almost the same instant that they spilled from her, yet spewing out her anger seemed the only balm for her injured pride.” But then there’s a terrible sandstorm, and some nearby tourists are injured and require immediate medical attention—there’s nothing like a compound fracture of the leg, facial lacerations and third-degree burns to bring a couple together. Whether they are able to heal an impulsive would-be nurse’s psychological difficulties remains unanswered.

Sending Kitty into a miserable experience in Hollywood was a bit too easy; a deeper (yes, I am not afraid to use the word in referring to a vintage nurse romance) book would have bestowed her with success in the movies, yet still allowed her to choose nursing in the end. The writing was hardly Jane Converse’s best, though the character of Damon Dyer was certainly memorable. While it had some interesting bits, Nurse in Hollywood was not worth memorializing in paint.