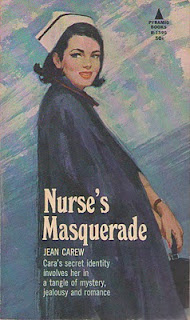 Never in her nursing career had lovely Cara Merrill received so strange a request. But Brent Butler was so persuasive that she reluctantly agreed to accompany him to the fabulous Butler estate and pretend to be his debutante fiancée. Cara’s real purpose, Brent told her, was to watch over his elderly uncle whose health had been mysteriously failing. Brent was suspicious of his handsome cousin Paul—and when both men declared their love for her, Cara had to make the most important decision of her life!

GRADE: C-
BEST QUOTE:
“When you’re in love, the eyes do get shinier.”
“Seaking of fireworks, you should have seen the display Dad put on when he heard I’d ordered a topless bathing suit!”
“If two people are in love, there’s no use to discuss the pros and cons of the future like a Philadelphia lawyer.”
REVIEW:
Cara Merrill is bored with working as a nurse at a New York City hospital. She’s only 22, and presumably has only been there for a year or two—she’d better get married quick so she can give up her job permanently and become a housewife. In the meantime, however, she’s saved up some money so she can sleep late, go window shopping on Fifth Avenue, and take drives into the country. But the money is running out, and she needs a new job. So she sends a “rather flippant note” in response to an ad in the paper seeking a nurse who is “experienced, blonde, willing to live in the country (large estate).” Why she needs to be blonde is never addressed, but her facetious response surprisingly wins her an interview. Even more surprisingly, though she opens the interview with Brent Butler by scolding him about his unusual ad, he offers her the job. The position entails pretending to be his fiancée and going to stay for a month at Soundings, his Uncle Josh’s Long Island estate, to find out if Josh is being poisoned. Josh hates doctors, so Brent can’t just take Josh to see one, and instead has concocted this scheme to get him medical observation on the sly.

Cara agrees to the plan, and before you know it, she is en route to the estate in a shiny new beige convertible with a huge sapphire on her hand, both courtesy of her faux beau. Cara is to pretend she is a debutante, which means only gussying up her language. “ ‘It’s a …’ Cara began, and stopped. She had been going to say ‘good,’ but remembered her debutante status and changed it for the livelier, ‘a keen custom, I think.’ ” Naturally, everyone in the house is totally fooled, even if she has never played golf or tennis, can’t sail very well, has never left New York, knows way too much about concussions, and wears dungarees and a green and white plaid nylon frock, the very idea of which send shivers down my spine.

Soundings is a large unkempt mansion with “a vaguely sinister air about it,” which seems to stem largely from its color: “Who ever heard of painting a mansion brown?” Uncle Josh has been bound to a wheelchair for years from polio, but is otherwise in good health—except for these attacks in which he feels “squeamish” and appears sallow and drawn, which always seem to come on after dinner. The suspects include Josh’s sister Susan and her nine-year-old daughter Linda, who have just returned to the States from their plantation in Haiti. Brent’s cousin Paul, a “perennial college boy type,” flirts madly with Cara, making Brent look at her with squinty eyes. Diane Forbes, an old pal of Brent’s, is hanging around the house, apparently determined to win Brent for herself, which makes Cara green with envy. There’s a lot of talk about how neither one of them means a whit to the other, but we know differently, don’t we, readers?

When Paul takes Cara sailing one afternoon and they are late returning home, Cara and Brent have a fight on the terrace, and she gives him back the ring and drives back to her Greenwich Village apartment—only to hitch a ride with Brent back again four days later because Josh had asked her to come to the July 4th festivities. Once there, Cara is growing increasingly concerned because Linda has created a voodoo doll of Diane. “Cara stood as if turned to stone. This was no childish whim!” For someone who doesn’t believe in black magic, she sure gets worked up about it. If it were me, I’d be more concerned about how Linda keeps going on about murdering Diane: “I’m going to kill Diane. I hate her!” Instead, Cara dishes out a treacly lecture: “If we want to hurt another person, and if we have evil thoughts about them, we really hurt only ourselves.” But she should be biting her tongue. Linda tosses her Diane doll into the pool, and a few hours later the phone rings—Diane has driven off a bridge into the river! She’s not dead yet, but maybe we can fish that doll out and try stabbing it with Linda’s “machete,” a silver letter opener!

For Linda’s next act, she concocts a potion out of ground beetles, soy sauce, and rum to feed to Uncle Josh to make him well again. The other adults are banished from the library while Linda, wearing a red scarf around her head and a pillow case as a dress, holds a private ceremony with Josh. Cara feels the sense of menace of the estate stronger than ever, and is shivering on the terrace and tearing her handkerchief to shreds while Paul chain smokes, Brent paces, and Susan clasps her hands tightly in her lap. Even the butler is poised at the door, ready to dash inside. What exactly are they afraid of? And if everyone there thinks this is such a terrible idea, why are they allowing the child to go through with it?

Linda’s voodoo works again, but not as she had planned—Uncle Josh drops with a massive heart attack. Cara springs into action, immediately asking the butler to put Josh to bed—apparently the nearby hospital isn’t a suitable option—and donning the uniform and cap she has brought with her. Josh is saved, and the butler gratuitously reveals that Josh’s “well-publicized attitude toward the medical profession was mainly a pose.” Why he would pretend such a thing? The poisoning angle is never mentioned again, and Cara is engaged just pages later, at the Fourth of July fireworks.

It’s a quick read, and not terribly painful, though the loose ends do flap annoyingly. I was somewhat perplexed by all the bizarre relationships that end by passing unremarked. Is jealousy supposed to be the same as love? Is Susan, who has dismissed Cara’s concerns about Linda, to blame for her daughter’s transformation into a (somewhat successful) witch doctor? And what about the voodoo—is it just coincidence, or is it supposed to be real? I’m left with more questions than satisfactory answers on the last page of this book. Really, the best thing about it is the cover—but even this, when we are all but beaten over the head with our heroine’s blonde tresses (they match her car!), leaves you wondering.
Posted by Susannah at 5:15 PM